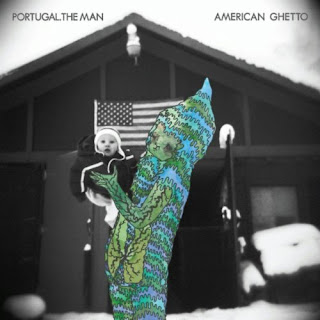 The Portland, OR based alt rock band Portugal. The Man has been up to a lot lately; about an album a year, to be precise. Such a strain of creative flow would bend or break most bands, but P.TM seems to thrive in it, with the underground “Censored Colors” and the poppy, upbeat “The Satanic Satanist” as their last two releases. “American Ghetto” returns to darker, more sophisticated colors, utilizing more distortion and processed sounds. Right from the get-go is “Dead Dog,” a declaration of the band’s darker approach. Throughout “Ghetto” are good choruses and hooks, almost reminiscent of their previous release, but what’s missing is a bit of that joyous explosion of sound that marked “Satanist,” the wondering of what is going to happen next. As a result, their sound drags a hair, and finally becomes tired around “Just a Fool” and “Some Men,” which seem to fall off the album. By the time the lush, singable “When the War Ends” finishes, we are reminded both of what P.TM is capable of, and that they haven’t quite reached that with this album. Not a bad album for most bands, but it just doesn’t quite knock you down like it should.

2010-03-03
Previous Post: The Ruby Suns: no fight, all shine
Next Post: Besnard Lakes are the Very Sluggish Build