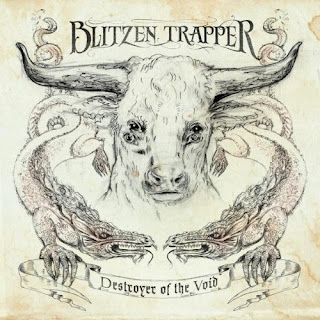 Since 2008’s breakout “Furr,” Blitzen Trapper has been (in personal opinion) a somewhat over-hyped band. But on “Destroyer of the Void,” the Portland, OR rock group pulls out all the stops, culminating in a fine selection of songs that would enthuse even the strictest of rock listeners. The title and opening track hits such a strong classic-rock vibe, that this little blog believe it merits comparison to “Stairway to Heaven”: with strong, rock-out guitars, it is Blitzen Trapper’s height by and far, a dizzying array of musical themes whose structure feels at ease with Led Zeppelin’s famous rock-suite. Will “Destroyer” be compared to “Zoso” years from now, Eric Earley to Robert Plant? Probably not, but damn, it is such a fantastic ride that Zeppelinites and those classic rock guys who say the art is dead (you know, all that “there is no good music anymore” garbage) will choke on their tongues. Listen to the title track and be impressed; the rest is also fantastic. Recommended.

Listen to “Heaven and Earth”: www.myspace.com/blitzentrapper/music