Great Scott! Ivan and Alyosha and Hey Rosetta in Allston! 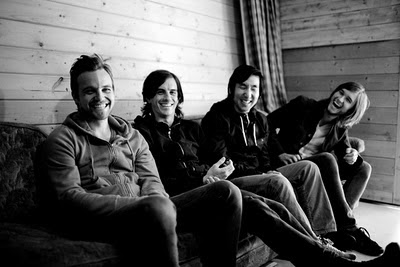 (L to R, copyright Jose Mandojana: Tim Wilson, Ryan Carbary, Tim Kim, Pete Wilson) It’s all acoustic. And with Ivan and Alyosha, that’s all they need: the foursome from Seattle take wing upon crisp guitars, soulful harmonies, and general good feeling. With some good press on their side, we’re feeling that their current Fathers Be Kind EP portends a similarly stunning debut full-length, due out early next year. Be sure to catch them in Allston, MA at Great Scott (11-30-11, doors at 9p), as it seems likely they’ll need to try their new material on the crowd. Tim Wilson and co. trek through the rugged Montana terrain, traversing mountains, braving snow, and suffering dropped calls to give us updates on their nascent tour.

MK: Fair enough. Where are you guys at right now? Your next concert’s in Chicago, right?
TW: We’re in Montana right now, we’re driving to Chicago.

MK: How’s the tour been so far?
TW: You know, this is the first day on the road. So: so far, so good. We’ve hit two snowstorms so far in about eight hours.

MK: Who are your influences; who informs your sound?
TW: I mean, we’re talking musically, right?

MK: Yeah. Well, you can talk any way about it, I guess, if you think there’s another particular novel that struck you and influenced your music.
TW: I would say, musically, it’s just whatever I’ve had on vinyl. Just, like, Elvis, Sinatra, Nat King Cole…
*static and dropped call*

TW: I’m sorry [about the dropped call].
MK: It’s okay. You can’t help that. Unless you put the satellites and the [cell] towers up. Then you could help it. We left off in the horrible, epic snowstorm, and you were describing your influences.
TW: Elvis, Sinatra, Nat King Cole. Harry Belafonte. As for new stuff, we love a band called Delta Spirit from Long Beach. Richard Swift has always been kind of a big influence. At the end of the day, I think everything goes back to the Beatles for us.

MK: One of my questions that I have written down is “do you have good tour stories,” but I guess I would have to change that to “do you have good driving-in-the-car stories?”
TW: We’ve been on the road off and on for the last eight or nine months. But we don’t do anything too crazy. We try to keep it pretty simple.

MK: I was hoping for something completely out of the ordinary. Wayne Coyne of the Flaming Lips has a crazy story about a rotund, sweaty guy attacking another band. I was hoping you’d match up to that, but you just kinda let me down.
TW: Sorry man. In order to stay sane on the road, we try to keep it pretty boring.

MK: Could you fill me in on your upcoming full-length?
TW: The new record we’re still currently working on, and we’ve released an acoustic demo of a new song or two. The new record should be done by the end of January. And then will hopefully come out in the Spring.

MK: The next question I’d like to ask is a very easy one: how do you write your songs?
TW: [Laughs] Ummm… so… me in particular, it takes me a while because I develop either lyrical ideas… I kind of develop ideas in my head or things that I hear that I really like, and I want to try to capture a similar vibe. It usually starts with a song I’m inspired by, and you just want to try to write something in a similar vein.

MK: But make it your own.
TW: Yeah, exactly. So I feel like I kind of mull over stuff in my head a lot, and then, when I feel like there’s something really good and interesting, then I’ll sit down with a guitar and almost let it write itself a little bit. Very rarely do I sit down and write a song and just say “okay, I’m going to write a song now.” It has to be something brewing.

MK: How do you start: with a riff, with the story of the song?
TW: I think it all starts with the melody. There will always be a lyric tied to the initial melody for the song. I feel that always has to happen first. Whatever happens underneath that is kind of secondary to whatever happens lyrically.
*dropped call*

TW: Sorry. Once again.
MK: Oh, you don’t have to apologize. Unless you actually make the snow, in which case you would have to apologize for bad timing. Leaving off where we were at.
TW: I’m always looking for a good song and looking to write a good song…

*2 dropped calls later*
MK: Hello again, how’s it going?
TW: It’s good. We’re gonna get through this.
MK: What should people expect from your Boston…
*another dropped call*

MK: You know, Tim, you have a very soothing [voice] message. Your voicemail is incredibly calming, even though I’m getting frustrated with the calls dropping all the time; I just listen to that voice, and it just soothes my soul.
TK: Dude, I’m glad. Okay, here’s what people should expect. It’s nerve wracking, but we try to go up there and have a lot of fun. You kind of have two choices: to go up there and be self-conscious, or just go up there and make an idiot out of yourself. Which is what we try to do; have fun, have a drink and play our songs.

MK: Good, spirited, clean fun. As opposed to Guns N’ Roses kind of fun, where you brawl with people in the audience.
TW: And no brawling, you know. Although Pete almost fought a guy who was trying to get into our RV one time, which was pretty funny.

MK: Was he out of his mind or something?
TW: This guy names Sean in Dallas, TX – oh no, it was Shane – he had a little too much to drink, he was kind of a local. It was three in the morning, and he was trying to take some guitar pedals and run off with them. He was trying to get into the RV.

MK: You want to be careful with drinkers. My roommate in college got drunk once and urinated all over everything in the room. I had to clean up afterwards, too.
TW: That is horrible.

MK: Be thankful the guy didn’t make it in and start urinating on various things in the RV.
TW: I’m really OCD, so that would’ve really pissed me off. I hope you got a new college roommate after that.
MK: [Pause] Eventually.