Ivan & Alyosha debut had some good times, some not so 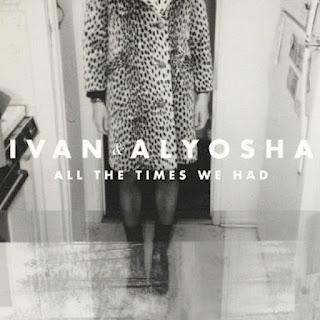 Of all the times that this Seattle quartet has had, this is the most important one: the debut of their highly anticipated full-length. Ivan & Alyosha hit the NPR circuit and gained recognition for their pleasing harmonies; they’ve even been featured on other illustrious blogs of note. For all the press and ballyhoo and our own adoration of their two EPs aside, we’re going to be the first to say All the Times We Had came off something as a buzzkill: yes, it has “Fathers Be Kind,” but it’s also lacking another real singable single off its eleven tracks.

Which is murder for this kind of album. Their melodies are potentially singable, and at a relaxed tempo that seems to promote singing, but the lyrics and supporting instrumentals aren’t quite simplified enough for that. Take fellow Seattle-ers The Head and the Heart, who also specialize in harmonies and open, clear song construction: almost each of their songs strikes a particular chord that you can’t but help to sing along. Ivan and Alyosha’s songs here don’t do that, they don’t strike that emotional chord, so what’s left is a medium-tempo album that’s passable in most ways but certainly not a revelation. “Running for Cover” fails this way, as the chorus isn’t something we’d like to hum along with, either in open or in our head; “On My Way” is more what the band should be aiming for, but doesn’t often hit. Another dagger in the gut is that the stories they’ve written here are good concepts – the title track being a retrospective on a failing relationship – but the pieces they’ve brought doesn’t quite stew together right, and the album falls a little flat in several places – just a pincha salt, please!

We still think the gents can pull something together for round two: with open harmonies, good clean guitar and instrumentals, and the general material here, it could easily have been a brilliant album. What they do have is passable yet, not the upper echelon of music, so we’re going to go ahead and recommend it, though if you already have their two EPs you probably won’t miss not having this album.