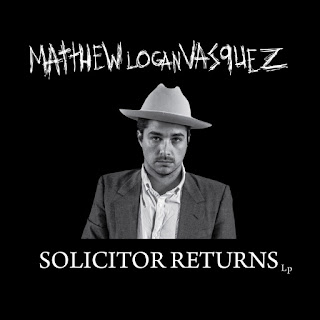 Let’s cut to the chase for y’all: it’s a good album. Now Austin-based rocker/writer Matthew Logan Vasquez, from Delta Spirit / Middle Brother fame has his solo album. And it’s good. It took us a few listens to get into his slower pace on here, but it’s grimy, it’s deliberate swagger, it’s confident and assertive. Some time back, Vasquez mentioned that he envisioned his Delta Spirit not as “Americana,” but as a rock outfit. We think this is the album he envisioned when he said that (not their decent, but lyrically flawed 2012 Delta Spirit).

Is it still Americana? Is it just straight rock? Is it more country, even? We don’t care at this point. Solicitor Returns may not have the crazy, jump-off-a-roof (in a somersault) vocals of Delta Spirit’s 2006 EP, I Think I Found It (which is one of our favorite EPs – ever); but it lays in a Johnny-Cash-like groove, stripped down, emotive vocals, almost eschewing songwriting in favor of pure musicianship. And then we get gems like “Bound to Her,” a synth-heavy, somber dirge that crushes you under the weight of its sober beauty. It’s the kind of song that we’d never thought we’d dig into – trudging, simple chorus, nothing terribly fancy going on. But… yeah, it’s gorgeous. “Black East River” is enjoyable as well, mostly because it throws back to those soulful vocals in his starting days, even though it seems like his crazy dynamics are all but gone from his songwriting. In any case, it is confident like we said, it’s mature, it’s music that doesn’t seek to impress or dazzle. It’s music that looks to crush you, and it does.