Nathaniel Rateliff Sweat It Out on Stax Debut 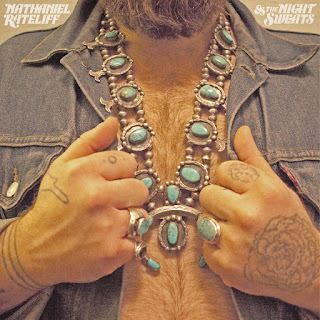 We caught him at the Newport Folk Fest nigh two months ago, and this grimy, (night) sweaty fellow showed us how to boogie your tired soul out. The Herman, MO-born Rateliff is indeed soulful, smoking, burning on his self-titled Stax debut, his fourth full-length. If you haven’t heard “S.O.B” on the radio, humming in the bar, in the bottom of that bottle, then maybe you should sober up and clean your ears out. Seemingly his anthem, Rateliff’s strength here, and on this album, is the grit he blows through his lyrics. The songs are written well, but really, it’s Rateliff’s (+ Night Sweats’) performances here that could turn even “Mary Had a Little Lamb” into anguish, soul-searching and catharsis.

That link to “S.O.B.” above should suffice, and while that track seems rather pervasive, our snobbish selves have actually pulled a few others that we slightly prefer to it. “Howling at Nothing” brings out such a primal desire to dance – no, not EDM dance – but more like this: “We were howling at the moon / We were shaking our hips.” Dancing the pain away, we think explains it. We similarly love the opener and the closer, and even the songs we don’t dig as much (“Thank You” – My Morning Jacket still has a monopoly on that in our heart), we still dig them enough. We docked this album a point down to 4 because some of the songs don’t really bring out Rateliff’s stellar, gut-gripping performances. “Look It Here” is another one of those, and while the Night Sweats shine all the way through, it’s really Rateliff’s howl that we’ve come for.

Overall, an excellent soulful rock album that you’ll want to drink / punch / swing to for as long as you can stand on your two feet. Highly recommended.

Try them out on Soundcloud, and make sure to get some freebies on Noisetrade (while they last!).