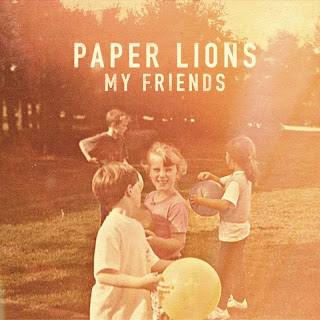 Pop-foursome Paper Lions sing clear, straightforward pop on their sophomore full-length. Hailing from Belfast, Prince Edward Island, (that’s in Canada, in case you were wondering), their melodies are youthful, bright and polished, nostalgic and playful. It’s not just the polaroid that reminds us of a guitar-centric Vampire Weekend – they’re both pop lead by very clear male vocals. But we weren’t huge fans of Contra, nor of My Friends here because these songs simply aren’t dense enough, and don’t quite bring their subjects to a precise and memorable point. Let’s call that issue one. Issue two is the instrumentals, and we must’ve mentioned this before, notice the drums! they hit simple beats, which is just no fun. Half the time a melody is interesting enough to cover it up, but the other half, when the melody is bare, those drums are all you’ve got, and man, are they boring. The band works together, but they’re not always entertaining.

Our picks here are “My Friend” and “Pull Me In.” That first one shoots a clear 80s vibe on the keyboard; and then it drives right into a falsetto chorus. It’s layered and produces a full sound, backing the otherwise weak-ish vocals by Rob and John MacPhee, filling out the speakers rather well. “Pull Me In” has one of those choruses that just sticks with you on random mornings, simple but fulfilling, a bit more of a rock song. The other songs here get pretty close to these two in terms of enjoyment, and they’re really not awful, just not worth your 14 or however-many dollars. They play nice, they’re fun, but we’re kinda glad to get this one out of the way and move on to something else.

Some of the songs may be pleasant, but the whole of the album is still a disappointment. It’s worth a few spins, but not really much more than that; take a pass.