Portugal: The man behind Portugal. The Man. 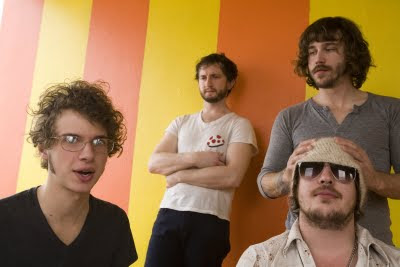 The band with a penchant for punctuation are back with a fourth album. In case you haven’t heard, the Wasila, AK-born quartet have been making waves with ’60s pop-inspired “The Satanic Satanist,” released in July of this year. I got to stake out a few minutes with this busy band to talk merch before their upcoming concert at the Paradise Rock Club in Boston (10-18-09 at 8:15p, $15 www.livenation.com). Bassist Zachary Scott Carothers reveals what it’s like to be psychedelic in a recent phone interview. (Photo, L to R: Ryan Neighbors – keys, percussion, Jason Sechrist – drums & percussion, John Baldwin Gourley – guitar & lead vocals, Zachary Scott Carothers – bass)

MK: You probably get this question all the time: why the punctuation?
ZSC: I guess it’s just to state that “Portugal” is the name of the character that we kind of created, and then just stating that he is “the man.” It was supposed to be to clarify things a little bit, but I think it just ended up making things more confusing, to tell you the truth.

MK: This guy you’ve created, how would you describe him? Would he be the spirit behind your music?
ZSC: Yeah, definitely. It was kind of in the vein of Ziggy Stardust or Sgt. Pepper, just creating a fictional character that would perform our music, and we were going to be the backing band for this fake man. I guess it’s hard to describe him physically, I don’t know. I don’t know if I’ve ever really thought about that. [Jokes]I guess maybe a mix of like Hercules and Jesus, or something like that…?

MK: So super-awesome feats, and Kevin Sorbo’s hair. Would he look anything like your album cover? – which, I love the colors on it, but it kind of freaks me out.
ZSC: Yeah, it’s pretty crazy. John (Gourley) and our buddy Austin Sellers worked really hard on that, and I’m really happy with what they came out. That thing just turned out awesome; we were all super-pleased with it. We’ve gotten really good reviews as far as the artwork goes.

MK: In addition to your psychedelic album cover, your opener, “People Say,” is also inspired in part by Vietnam.
ZSC: We felt like a good-ole protest song, you know. There’s not a whole lot of those going around these days. Oddly enough, you think that there would be.

MK: Now that you’re in Portland, Oregon, is there anything you miss about Alaska?
ZSC: Definitely. My family, I guess first of all… I guess just the environment (too). It’s really beautiful up there. And it’s a really great place to grow up, especially being a kid up there, we just had so many woods and rivers and you get to do a lot of fun outdoors things growing up there.

MK: Might I suggest listening to “The Village Green Preservation Society” and “Arthur”?
ZSC: We’ll have to check that out. A couple of the other guys in the band have listened to them, but John (Gourley) basically had just been listening to them for the last couple days, mostly the song “Strangers.” He’s been probably listening to it about three times a day already.

MK: Where did you get some of your influences for “The Satanic Satanist?”
ZSC: A lot of it had to do with the stuff that we grew up to listening. Kind of oldies radio in Alaska, and there’s a lot of old Motown and soul. We also took a lot of influence randomly from mix CDs that our producers had sent us. Before we went into the studio, we were emailing back and forth and talking about different sounds, and so we’d be emailing different songs; “we really like this drum tone right here,” you know, this bass tone. They would send us these random soul mixes and Motown mixes of bands that we had never heard of, just little tiny bands from the 60s that were just absolutely amazing. We definitely got a lot of inspiration from that, and also just the gear in the studios. It was our first time ever being in a real studio that wasn’t just run by one of our friends. [The gear] spanned all the generations [of music] that we’ve been listening to. We tried to do ’50s and ’60s structuring… we had equipment from the ’60s and ’70s, … ’90s production. It spans basically everything we know about contemporary music.

MK: Going with the psychedelic theme, what other merchandise might you offer? Are lava lamps in store?
ZSC: [Laughs] You know, we’ve been thinking about different merchandise. We’ve had a lot of ideas, but it never really comes through with anything in particular. We’re still keeping it pretty basic. But we definitely want to get in to some of the weirder merch.

MK: Could you do those weird white suits on your “Do You” video?
ZSC: Our friend made them, actually. John, our singer, designed them, and then we took them to a friend who just kind of sews as a hobby, and she made them for us. We made some spyrograph screens and screen printed on them. They ended up coming out really really cool. Those things are definitely awesome. It’s very tight. [laughs]

MK: I was hoping you’d have them on your website.
ZSC: I don’t know if anyone would buy them. But it would be an interesting thing to find out.

MK: You’ve been doing one album a year; do you have your next one lined up?
ZSC: We have one that’s done, pretty much done, I guess it’s still got to be mastered. We’re not sure if it’s going to be a full album – it’s ten songs – but we’re thinking about weirder ways to release it. It might be something inbetween this (“The Satanic Satanist”) and the next record that we do. We’re scheduled to go back into the studio… sometime in January or February, and do another one. (The songs are) a lot more different, (have) a lot more drum loops and synthesizers, even more than on the last record.

MK: Any idea what it might be called?
ZSC: Not quite yet. Or, we’ve got some ideas, but I don’t technically know if we’re allowed to say them yet. Those things change pretty often for us.

Check out The Man’s super feats at: portugaltheman.net