Ray Davies has friends. A lot of friends. 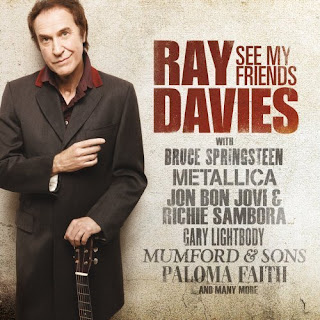 In the interest of full disclosure, let’s get something out of the way: The Kinks > The Beatles any day of the week (honestly). But seeing a collaboration this big almost evokes those ginormous humanitarian causes celebs sang about in the 80s; also, Davies hasn’t penned a new one here. Coming off of 2006’s brilliant “Other People’s Lives” (and the excellent follow-up, 2008’s “Working Man’s Cafe”), one has to admit “See My Friends” looks like a creative rest for one of rock’s (and punk’s) most influential songwriters. What it boils down to is this: the album is something of a mixed bag. The lows: Paloma Faith tries too hard on “Lola,” and Metallica, though cool-sounding, don’t really add much more to “You Really Got Me” than Van Halen already did (though: imagine what Karen O would do on this track). To be expected from a reprise album. The surprise is the freshness that some of these musicians bring to the songs: Mumford and Sons sing “Days/ This Time Tomorrow,” tearing it out as if it were one of their originals; Amy McDonald is so perfect on “Dead End Street,” we argue this recording’s perhaps better than the original; and Jackson Browne adds ‘”stunning” to the description of the already gorgeous “Waterloo Sunset.” The verdict? Davies fans shouldn’t fear buying a cheesy “greatest hits” revamp; that is to say, it should tide them (us included) over until the next original. New listeners have a good place to start on the Kinks library, but we’re going to suggest picking up “…Are the Village Green Preservation Society” and “Lola” before this one. Still fun, still recommended.

2011-04-01
Previous Post: Help Japanese survivors of the tsunami (and listen to music, too)
Next Post: “Strange Song” takes Cohen’s to Nadia Kazmi’s world