“Self Made Man” Larkin Poe’s Romp into Rock 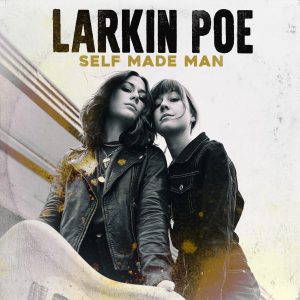 Larkin Poe – Self Made Man

Rebecca Lovell’s is not the voice of an angel, unless that angel sported a black leather jacket riding a classic Harley. As one half of the blues-nouveau duo Larkin Poe with sister Megan Lovell, Rebecca’s vocals ride on a lane between Hozier and Steven Tyler: deep, masculine, a confident contra-alto swagger. Which suits Larkin Poe’s latest full-length album title “Self Made Man,” an assertive rocker replete with Megan’s distorted guitar, heavy drums, and vocal reverb. Perhaps this is as good a time as any to mention Larkin Poe’s collaboration with Tyler in 2016; perhaps his classic “Walk this Way” got into their bones. Whatever the cause, their 2018 Grammy-nominated “Venom & Faith” feels like a distant blues memory from a road travelled long, long ago. Is this the future of Larkin Poe now?

The two sisters, descendants of legendary writer Edgar Allan Poe, claim a different artistic space from the famous depressive poet. Larkin Poe tend toward more of the rebellious than of the macabre. That said, if Poe ever needed a hard-rocking pick-me-up, it isn’t hard to imagine him grooving to Larkin Poe’s dark lyrics and infectious choruses. If Poe had the opportunity to spin “Self Made Man” before his death, perhaps he would’ve shelved early drafts of “The Raven” and started something more like Chuck Palahnuik’s “Fight Club.” But we digress.

Fanciful musings aside, the album opener and title track, “She’s a Self Made Man,” cuts through the bull and thrashes hard on the low-end of your speakers. Right from the get-go, Larkin Poe play on the stereotypical male-gazing rock and turns it on its chauvinistic head. That girl you were supposed to win two verses ago? Well, “Like a cannonball / Moving down the track / Baby’s on her way / She ain’t coming back.” Looks like those tight, tight jeans didn’t work. Better luck next time, pal.

“Holy Ghost Fire,” the second single, proclaims the heart of the album in no uncertain terms: “Stick a fork in a socket: let’s rock.” You might want to stand this song next to their 2017 electric gospel album “Peach” and do a quick side-by-side comparison: they both touch thematically on religion, but “Peach” seems to be about avoiding the Devil’s works, whereas “Holy Ghost Fire” seems to be about doing the Devil’s works. Idle hands are the Devil’s guitarist, apparently.

Their cover of “God Moves on the Water” by Blind Willie Johnson takes a big risk, reinventing the nearly 100-year-old blues song about the sinking of the Titanic into a broader song about tragedy and God’s will. They add to that tragedy “When the streets of San Francisco / buckled like a horseshoe belt” in 1906 and the 1926 Louisiana hurricane. Although earthquakes and fires are a stretch of the song title, it’s a fantastic revamp and shows the depth of their blues appreciation.

It’s quite apparent Larkin Poe are having a blast with their new style. But for all the fun and games, “Self Made Man” isn’t a win straight through. They’re still trying to discover what they can do in this new, more direct language. “Scorpion” is one of their weaker tracks, suffering from the two-and-four syndrome that plagues even the best rock drummers. Moreover, its lyrics (“I never felt this high before / I feel it, feel it / In my heart”) are contrived, perhaps from Generic 80s Hair Band (TM). While not a full-on stumble, “Scorpion” hits auto-pilot for its duration, stuck in the musical voice of the whole album.

“Every Bird that Flies” doesn’t quite take flight, either. The chorus feels repetitive after the third repetition (it’s not hard to guess what four words repeat, either), and the low-key feel of the keyboard doesn’t quite hit the sultry stride it aims for. The song feels more like an interesting fragment than a full-on song, something that a musician would love to tinker with, but doesn’t quite suit the ravenous appetite of a listener promised the adventure of a new musical road.

The biggest weakness of this album is its tendency to lax at a few moments. The songwriting, and even performances, fit too comfortable a groove in these spots, which makes for a handful of predictable, or at least not full-on exciting, moments in an album that should be a trailblazer for the Lovells.

There’s a reason that “Venom & Faith” got a Grammy nod, and perhaps less of a reason it didn’t win the award: their previous album was a varied, dynamic, and thoroughly engrossing exploration of the blues. “Self Made Man,” then, suffers greatly from setting a high bar with grimy lyrics and no-holds-barred melodies, and suffers somewhat from falling short of those heights at a few moments. Nonetheless, this latest offering from Larkin Poe is a joyous, enjoyable blast on those speakers when you’re cruising on a highway, window open, lungs blasting along. Recommended.