By: MadMattKeefer
In: _Concert Reviews
With: 0 Comments 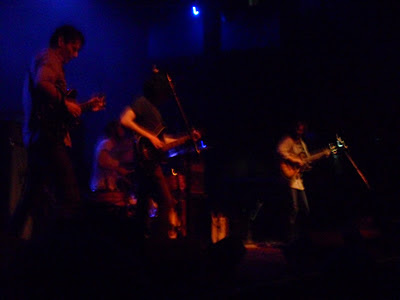 One of our favorite (relative) unknowns, Austin, Texans White Denim took the part of first opener to Manchester Orchestra. The rock quartet – that’s how you know they’re tough to describe, basically ‘rock’ must suffice – pounded out a graceful act, starting in on “Street of Joy,” with vocalist James Petralli pulling from the mic, filling the air with the color in his voice. (Check out that awesome blur effect in the pic c/o Matt Lacorazza; L to R – Austin Jenkins, Josh Block, Steve Terebecki, James Petralli) The foursome cut a clean, gorgeous performance on this one, and drummer Josh Block enjoyed the heck out of bashing through “Bess St.” And when Petralli gets down and dirty on a solo during “River to Consider,” then we know we’re in love. The brief set – a bit less than 30 minutes total – was certainly worth the catching, and included mostly songs from their new album D, as well as their older “Shake Shake Shake.” We’ve got to be honest here: 30 minutes is not quite enough for these guys. We’re hoping their upcoming tour will find a better audience than they found in the Manchester Orchestrites; the headliner, in our opinion, doesn’t seem the most natural pairing in band dynamics and philosophies. And another moment of honesty: the dead serious MO (and The Dear Hunter, too) don’t get our rocks off quite as the energetic, chameleon Denim does. Our verdict? If you appreciate dynamic songwriting that flits to-and-fro, and don’t want another drummer banging on the beat, catch them with Wilco in the SW (wait, they’re touring with Wilco?? holy cripes, time to relocate). Wonderful set, with our only regret being that they certainly needed more room to flesh out their solos. Oh, and hopefully they’ll have time for some pieces from Fits.