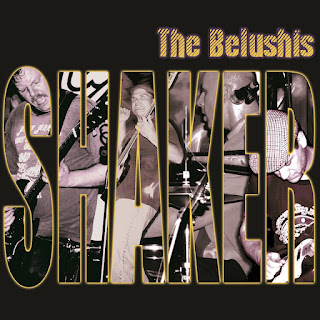 Our hearts have been already been stolen by other Canadian rockers, which puts this Vancouver quartet in some tough competition. Taking cues from AC/DC and other classic rockers, The Belushis (love the name, by the way) pound their way through each of their dirty dozen, the way classic rock should be done. These songs don’t stray too far from the time-tested formula of “sex + drugs + rock/roll,” and while that isn’t necessarily a bad thing, these Belushis don’t have a whole lot more to add to that. When you consider what makes classic rock truly classic, it’s not the simple beat or blasting guitar; it’s what that rock band has that no other does. AC/DC, Guns N’ Roses – inimitable vocalists. The Guess Who – un-rock song concepts. Led Zeppelin – an out-of-tune guitarist, violin bows?? Regardless, the most successful rock acts develop an instantly recognizable musical voice (has a band ever successfully written another “Battle of Evermore”?), and in this genre, you also need a brilliant vocalist. Check those classic bands above: any group nowadays would kill – probably literally – to get any of those vocalists, sober or not. As such, we don’t immediately connect with the tracks here, as hard and kick-arse as they are; a few spins later, and all the ‘rock out and die’ anthems here are about as enduring as they’re going to get. These guys aren’t particularly bad or anything, but your time and money are worth something, and we can think of other ways you could better spend either of those. Take a pass on this one.

2012-06-27
Previous Post: Kitty Clementine pulls out all the stops (and horns)
Next Post: A Newport Folk Festival question…?