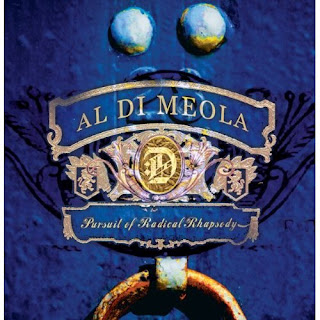 When judging a record by such a technically renowned master of the fusion guitar as Mr. Di Meola, there are a few difficult things to consider: technical prowess, the crafting of the songs, and how they match up to past accomplishments. Ultimately, we want to tell you whether to put your money on this CD or another. That first one, technical prowess, is no issue here: Di Meola is as fine as he’s ever been, and has definitely retained his delicate touch. The songs, though, lack a bit of that je ne sais quoi that might make you (you the purchaser, the ultimate guide on this blog) put this CD in over, let’s say, Bela Fleck or fellow Return to Forever-mate Chick Corea. And now the third part, that these songs lack the immediacy of some of his back catalog. Yes, we’re going to be unfair and say “Elegant Gypsy” and “Land of the Midnight Sun” are albums that deserve time on the turntable, but it’s true; “Pursuit,” while technically fine and dense, misses some of that fire that makes for memorable songs. Fans of Al’s complex song construction and supple technique will enjoy this release, especially the intriguing “Michelangelo’s 7th Child” and beautiful “Bona,” but it doesn’t quite catch the imagination or set the heart beating as 2007’s “Diabolic Inventions and Seduction for Solo Guitar.” We want to say it’s excellent, and in some ways it is, but unless you’ve already got those other albums (and some others), we can think of a few better places to start. Good for the entrenched fan, but the casual listener can invest better.

Ed.’s note: During the writing of this review, another classic Di Meola CD was acquired. Currently in pursuit of a radical vinyl of it.