Almanac a sore chapter for Widowspeak 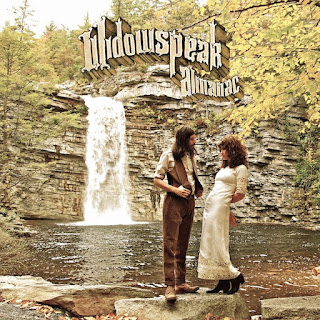 Rock and Roll duo Molly Hamilton and Robert Earl Thomas roll out their second album here, a dreamy-sounding, laid-back rocking affair. While they have a flair for awesome western-frontier enrobement (as evidenced by their cover), we’re not huge fans of their rocking and rolling here. The tracks have enough solid guitarwork to recommend that aspect, as on the opener “Perennials” and “The Dark Age,” but we have to fault the sweet lass on lackluster vocals; a Stevie Nicks she is not. She comes off dull instead of sparkly-dreamy, and her voice doesn’t pull us in, entice, make us wonder what else is going on. And while we admit our rather offensive preference for more stuff of a more rollicking nature, perhaps Widowspeak could have used some of that here. The album we have here is a chill one that doesn’t gel, not confident but slow and dreary, and overall uninspired. Which is a shame, because we really like vests with watch-pockets. In any case, we’ll recommend you take a pass on this surprisingly tame release.

Stream the album most conveniently at NPR.