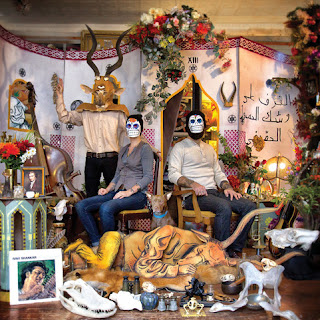 This is the Providence duo’s third album; the one following our favorite Salt for Salt in 2011. Brown Bird has finally come back, thank God or that horned creature that keeps showing up on their album covers, and while we’re glad they’re back for another go at their Eastern-European influenced folk, Fits of Reason deflates our excitement. There are a few changes between Fits and Salt; here, there’s the addition of electric guitar, and their sound goes more to European fiddling than the distinguished Americana of their previous album. First, our verdict on the guitar: too much. Brown Bird employs said fiddle and upright bass, and the guitar generally overpowers these and the vocals; it isn’t in balance with the swinging gypsy-ness that they’re trying to pull off. The slight departure from Americana would be acceptable, except we find them too often downtempo and not really stretching their vocals.

That’s our main complaint: check out “Barren Lakes,” with that guitar drowning out the acoustic parts, but also check out that MorganEve Swain and Dave Lamb don’t really give this music a heavy go. Salt for Salt was thick with emotion, but on “Barren Lakes,” the vocals are merely par. The album as a whole lacks their previously great vocal-dynamics, which is one of the main reasons to recommend their music. Without stretching their range, or even stretching their guts on this one, the flavorful writing of the tracks fall flat; they pass by without heart or soul, like errant ghosts. “Iblis” is one of the more successful tracks, not just because of its non-standard time shifting, but maybe because it’s instrumental and Swain and Lamb just aren’t on their game. There are good grooves here, and the effort is blandly passable: there is color and, as we mentioned, flavor in the unusual arrangements. You’re not likely to find American folk influenced by Egypt and Lebanon elsewhere. But as a whole, they simply do not come together, and they’ve certainly had better.

Tragic indeed! Go for Salt for Salt, as that album had made our year-end list. Brown Bird’s latest outing simply doesn’t deliver fits of anything, and for that we’re the poorer; take a pass.

2013-03-27
Previous Post: Charles Bradley No Victim of Age on Sophomore
Next Post: Not enough color on Black Angels’ Indigo Meadow