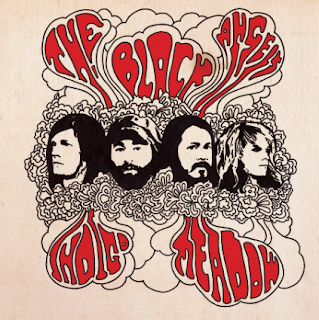 The Austin, TX foursome is on their fourth album of hard, psychedelic rock. Our biggest question about this album is how the group makes a rocking-out album that, with each playing, feels a bit stagnant. They hit all the checkboxes, lyrics, vocals, guitar licks, but the end result is an album that doesn’t invigorate psychedelic rock. They feel as if they are standing in place, which is never a good thing for a band.

Their single is great: “Don’t Play With Guns.” It’s the most singable of the tracks, written as a rock anthem about, yes, guns and violence. It leaves the strongest impression of the baker’s dozen on this album because it is well-balanced, simple, and goes straight for it. To use another analogy, they pulled the trigger here (ha ha, we know). But tracks like “The Day” are plodding, and don’t seem to be about all that much. There isn’t much of a story, there. We’ve tried to get into this album several times, as the vocals are appropriate, as well as the guitar, but that’s the problem: everything seems appropriate to the genre. There isn’t anything that particularly jumps out at us here, nothing brilliantly creative and new. In the end, Indigo Meadow is simply a collection of predictable psychedelia, the kind that doesn’t quite stretch itself far enough to make something of itself.

So try “Play With Guns,” but take it from us, the rest is mildly disappointing. Take a pass.