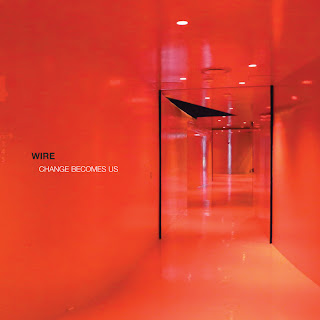 Thirteen is an unlucky number for London punk rock quartet Wire, for in the thirty-six years of their musical career, they come off really flat. Their songs have stopped exploring, some of them mid-way, and the band has deposited some almost song-snippets here as a challenge of whether to their listeners as to whether they still need to keep innovating. On Change Becomes Us, they do, and they haven’t. Their latest studio album is tired, dragging its feet to uninspired beats, each note old and depressed from what must be a carload of recycled drum hits and lyrics. Upon listening to any part of the album, one cannot help but get the image of a tired beast that should be put down.

The band is perhaps better on the short tracks than elsewhere. “Stealth of a Stork” goes by fairly painlessly, and quickly enough to boot, evoking their earlier punk roots with a driving punk beat, shouted lyrics. But it’s not meat enough to sink one’s teeth into; it’s simply a transitional song where they shine the brightest. The track before it, “Re-invent Your Second Wheel,” has a confusing smattering of mostly illogical letters as the verses, and one can get the sense of a lazy pen here. It sounds okay, but simply doesn’t get up past the bedsheets far enough to effort a listenable song. “Time Lock Fog” seems to operate under the theory that simple bass and monochromatic vocals are enough to carry a song, ignoring the fact that it might possibly come off dead and/or arrogant and/or uninteresting. The album as a whole is infested with such tracks, and we decided to reinvent the word “effortless” to describe it, as in “proceeding without effort.” That is the overall effect here.

Few bands have made thirty years fly by so fast, but on Change, we feel each creaking bone and arthritic hand beating out rhythms. It’s the kind of album that you want to come off well, because you’d hate to kick a dead horse, but that’s what they offered here, and we must oblige. Take a pass.

2013-03-21
Previous Post: Swallow Key’s sophomore as thin as a Ghost
Next Post: Charles Bradley No Victim of Age on Sophomore