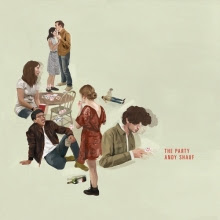 We have a strange relationship with Saskatchewan-ian Andy Shauf. We’re going to be honest: we caught a bit of his set at the Newport Folk Fest a year or two back, and we were entirely not blown away. Kind of underwhelmed.

And so his fourth album, The Party, almost feels the same.

But hear us out, because we believe the studio is his element. The Party is a concept album, a large cast of characters thrown together, each given a slice of the life of a house party. What seems underwhelming is here actually the quiet, silent eye of an observer giving insightful glimpses of the couple fighting and almost making up (“Quite Like You”), the awkward and somewhat gawky girl (“Early to the Party”), the bumbling, angry drunk (“Alexander All Alone”). These characters are lyrically well-painted, full, believable. Sonically, these tracks come from the voice of the introvert, taking everything in, and so they don’t dance and delight; they don’t rock and roll; but that’s not what they should do. They breathe. They conjure, they craft, and these tracks even find a steady rhythm for those who appreciate the stumbling, softspoken rhythms of a humanity looking for a place to be accepted. These choruses don’t shout, but they insinuate themselves in some of the deeper, softer parts of your consciousness.

What almost seems underwhelming, here, is that these tracks are so mellow, so understated, that it’s easy to pass by a gem like this. But pick it up, give it at least a couple spins, and join the wallflower as he observes this pastiche of modern American socializing. Highly recommended.