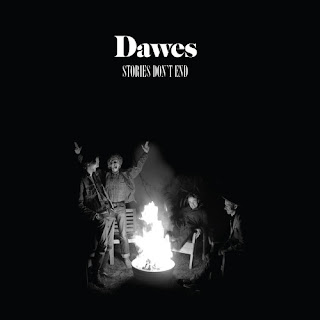 It’s great that Dawes’ follow-up to their lukewarm 2011 “Nothing Is Wrong” has such memorable choruses and warm, tingly vocals, because we were getting a little worried for a bit. Stories Don’t End, the latest by the L.A. quartet, is at times rocking, at times retrospective and wistful, always heartfelt. What we didn’t get from him last time, deep, involved vocals, is what sells the act this time around: Taylor Goldsmith gives his performance enough oomph so as to not sink into what tends to be an un-groove for him, given the mid-tempo nature of these songs. Add to that his excellent lyric-writing, and you get an excellent mid-range rocker like this one.

“Just My Luck” and “Someone Will” are more downtempo than the rest, and come off a little sleepy; that is our only complaint about this album. They are average; when you get to “Most People,” with a great chorus, one that demands you learn it and sing along, then we know we’re getting some of their stronger material since their debut North Hills. It bounces, it sways, it struts in such a perfect groove that it just infects you with its joy and simplicity. The opener, “Just Beneath the Surface,” finds itself with a similarly great chorus, shared by brothers Taylor and Griffin Goldsmith, hits straight home, no country roads or roundabouts, just direct, no superfluousness. Their vocals seem to open up more on this album, bringing a warmer sound to their songs, something more inviting and less stiff, which sometimes happens with this young band.

Stories Don’t End is the kind of album you want in your car; it has clear vocals, good stories attached to the songs, and again, those wonderful, singable choruses. We admit we’ve been fans of this crew since Taylor Goldsmith’s collaboration on “Middle Brother,” but now, there’s finally a second solid Dawes album worth owning, other than North Hills. Recommended.