Victory comes off with one for debut 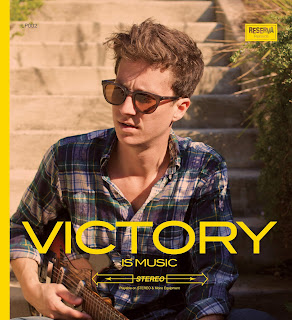 Pop has gotten deep-funky bass all over the place with L.A.-based multi-instrumentalist Victory, aka Robert Fleming. His debut is appropriate to the late-night scene on the other coast: cheery, surf-rock tunes mixed with cybernetic, street-cruising groove juice. It’s the perfect kind of driving music, at times, mixed with aloha summer sweetness (“Dirty Jeans”), the kind of vibrant, quirky album which is only missing a few things, namely, a lawn chair and a drink with one of those cheap little umbrellas. While the music passes muster here, we were hoping a little more on the fuzzy bass and dance-y quality to a few of the tracks here, as that’s where Victory channels his muse the hardest.

But it’s still good fun. “Play It” is that kind of track that sends you cruising, searching for burgers or drinks or ladies, we don’t know what. This is the track that fuzzes out that bass the worst, gets it all flipped over in a grand hook, vocals echoed over it, chanting. It’s pure fun, light, fluff, and we love it. System Strange is the next bass-heavy track on our list, and gets another nod from us for its joyous groove. Victory is Music does mix it up heavily, and we do appreciate that, but then you naturally get “Records” with it’s surf-rock mentality, and “Lazy Art,” which tries for a fairly plain swagger and laziness. Win some, lose some, ultimately, which you can afford to do when the average play-time is about two thirty.

This album isn’t going to win any awards, but it is a fun pop-romp, and we greatly enjoy “Play It” and the opener. It’s good music, just makes the cut, and comes off recommended.