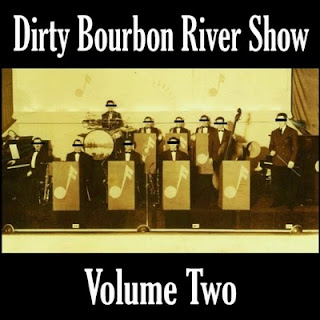 (Ed.’s Note: yes, there is a Volume One. No, it’s not reviewed here.) True to the creole mish-mash of the Big Easy, the Dirty Bourbon River Show mix rock and blues (with a shot of jazziness) and perform the kind of music you’d expect to find marching down Bourbon Street on uneasy legs. Volume Two is soaked in tradition, and eschews the tight, efficient sound of pop/rock for the deceptively “lazy” sound of the south. It’s by-and-far a more difficult act to pull off, especially in studio, and there’s no doubt fans of this fun, swaggering American music look forward to a spare number of releases; but music, like the mob, should keep pulling us back in. For Volume Two’s quirks and smirks, The DBRS don’t make that connection, either through exceptional vocals and instrumentals, or through inventive songwriting (or through intimidation, for that matter). The biggest crime this album commits is that the opener “Mad” promises energy and exuberance, and what Volume Two delivers is more flat than that OK Cola in the fridge. Take a pass.