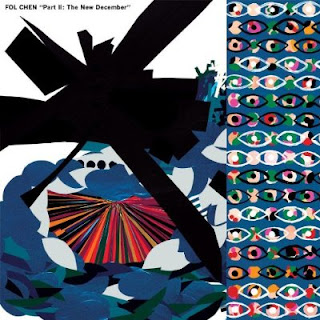 While still listening to the opening two tracks of “Part II: The New December,” we should remind you that Highland Park, CA’s Fol Chen takes experimental/ electronic pop very literally. There doesn’t seem to be a note that isn’t a bit off-kilter, a chord or chorus that doesn’t drop you off in a slightly unusual place. That said, back to those first two tracks: “The Holograms” is a playful, energetic romp with a few twists and turns, while the following song “In Ruins,” is an absolute explosion of pure pop bliss. Fol Chen’s follow-up to “Part I: John Shade, Your Fortune’s Made,” “Part II” is in total a sublime work of subtlety and, somehow, lack of subtlety; when every piece is in place, the result is a carefully choreographed dance of sounds and effects that knocks you in a different orbit. Yet, when the pieces are just a hair mis-calibrated, the show seems a bit of a let-down, such as “Men, Beasts or Houses,” or “This is Where the Road Belongs,” which share a dark, industrial feel. While these two tracks are still passable in their own right, they are clearly outshined by the brightness of the exquisite poppier pieces, leading to somewhat dragging moments. Though the work is not as bright as it could be, that’s still a good sign for the band: it’s this kind of experimentation in voice that, we feel, will pay off especially in an album or two. As a result, “Part II” feels like a transitional, though still recommended, album.