Everything is Dawes Tour 2012

By: MadMattKeefer
In: Dawes - Providence Performing Arts Center 08-06-12
With: 0 Comments 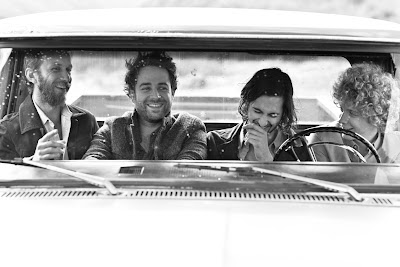 [Photo © Men’s Journal 2011] So, these guys. Again. They’re hitting up the Newport Folk Festival this year, and afterwards are pulling up their lobster traps in New England the following weekend.
So, we aren’t the hugest fans of their sophomore album, we’ll be quite honest, but we are big fans of these guys as musicians and, well, as guys. So much so that we’re erroneously naming their opening for Mumford and Sons on several country-wide dates the “Everything is Dawes Tour, 2012.” Let talent be called out: most of the NE dates are filled up, but we espy an couple openings in Vermont and NY *pshaw* for those lucky enough to grab them (July 31 and Aug. 7, respectively). Our fingers are crossed to catch them at the PPAC in little Rhody on the 6th… perhaps close enough to smell the Goldsmiths’ hair…
Just kidding. Honestly. But we do recommend a quick recap of these guys-es stuff, starting with Taylor Goldsmith’s collab on Middle Brother – “Blood and Guts” (monster pipes) and “Million Dollar Bill” (stellar penning) to name a couple. We’re going to catch up on their debut full-length North Hills when we have a breather from overcrowding them at the NFF, and we strongly suggest you do, too. Not overcrowd, that’s not nice; but we figure you all still have almost a week to snag a tic for you and a buddy/ potential date. Or a buddy’s date, we won’t judge. After she hears “Blood and Guts,” she probably won’t either.
-Mgmt.