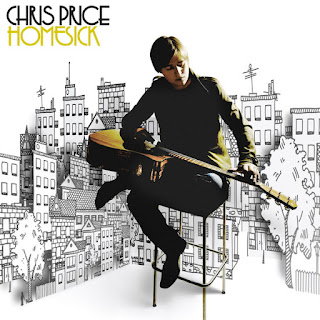 It takes an L.A. weirdo like Chris Price to record his debut entirely on an iPhone, and quite frankly, he made a pro call on it: Price has a kind of a very slight basement glaze over the audio, the kind that small acts pay a ton to get up to, or that big acts pay even more to take their sound down to. We appreciate his ear for the subtle color, and moreso his reasoning behind it – taking the recording process back to old school, via The Beatles and (yes!) The Kinks. Despite the trip down nostalgia drive, there is a sizable speed bump here: Price’s material ain’t a Tiger in the Tank. The songs on his solo debut run the gamut of foot-stomping pop – “Up in Flames” – to the tenderer stuff (“For All We Know,” much of the others), but really, we’re trying to scrap up a reason to replace your (unnecessarily) embarrassing John Mayer playlist with this album. There simply isn’t much here that gives us a sense of how Price’s personality; his acoustic guitar and often-gentle vocals don’t really distinguish him much, if at all, from the ocean of like-minded sensitive contenders. And to be honest, The Beatles (and certainly neither The Kinks) weren’t all saccharine and eye-gazy: “You Can’t Do That,” “Another Girl,” “Norwegian Wood” anyone? Let alone the stuff they did after Rubber Soul/Revolver; if all they did was make girls swoon, they’d just be an early N-Sync minus Justin Timberlake (which, musically, is really a plus). We much appreciated his professional ear on the audio, but what we really needed was a hint of turmoil, explosions, darkness, something; not just another pop boy-prop on stage. Pass on this one.