Fergus and Geronimo come off too unlearned 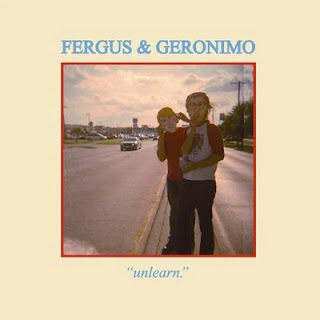 There’s nothing wrong with lacking polish. Some acts benefit from it: it often shows frustration, or grit, or is just a style in and of itself. The blues band Jimi Hendrix started with complained he was out of tune; Coltrane, too, received harsh criticism early on for a lack of a full sound: yet there’s no denying either musician’s pure technical talent. But on the Denton, TX duo’s premiere, a lack of polish is an obstacle to understanding “Unlearn.” One thing that we don’t get is a clear sense of Fergus and Geronimo’s ability to craft simple, clear songs, which may be why the more complex selections here don’t grab the listener’s attention; rather, they flounder and frustrate like a fish out of water. Writing and performing music is a life-long task, and hopefully these two musicians will come to a stronger understanding along their music career sometime down the line, because some of the concepts are interesting: “Powerful Lovin'” and the title track surprisingly take their cues from Motown. While the album doesn’t pay out like it should, one hopes a bit more practice and, yes, learning would help out these two. Until then, take a pass.