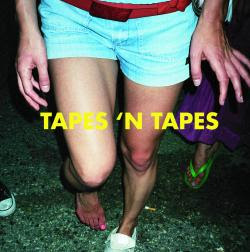 There’s no “magic bullet” to what works in music, no specific tempo or chord changes or guitar hooks, but if there were one element we’d have to pin on the success of Minnesota, MN’s Tapes ‘n Tapes latest album it would have to be Josh Grier’s pushing his vocal boundaries. The punkish color to his vocals is in part what makes “Outside” more successful than “Walk it Off;” it charges these rock songs with an energy lacking in their previous release. The other part of it may well be the whimsical attitude of the instrumentals on some of these songs (guitars on “One in the World,” for instance), which keeps the heavy instrumentation in check. Tapes ‘n Tapes aren’t here to make particularly deep music, but that’s okay when you get something joyous and synth-heavy like “On and On and On,” our first looped and relooped single of the year. It’s pop/rock in its finest form, and deserves your listen. The remainder of this album is strong, and though “Nightfall” seems a bit heavy in comparison to the other material, Tapes ‘n Tapes arrive in fine form and end on a high note. Pull out that Strokes album you’ve been listening to for the past decade, as it’s time to crank something new. Recommended.

Steam “Outside” at Spinner.com!