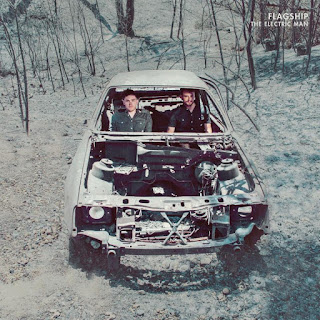 Charlotte, North Carolinan duo Flagship hoist the sails again in their sophomore LP, Electric Man. Here, Drake Margolnick (vocals) and Michael Finster (drums) aim is toward mid-tempo rockers, the more emotive ones instead of rock shredders, and generally hit their target; yielding a result like “In the Rain,” a drum-pounding anthem. But while Flagship hit their target, we’re going to admit: that target wasn’t too terribly high. The risks on Electric Man are minimal, the songwriting not terribly explosive, and the execution is above-par, but not much else.

But those drums, though… Yes, Finster definitely hits the percussive spot throughout the album. And Margolnick also tends to nail the vocals, more often than not. But again: the songwriting, the lyrics especially, aren’t really anything all that special. We’ve listened to this album a few times through, and the rough feeling of it is that it’s pleasant to listen to, but passes through without sticking much. We’d like to bring up a very different act, Conor Oberst’s Bright Eyes, which is vocally inferior (in terms of hitting those notes), but lyrically far superior (in terms of memorability). Bright Eyes has that kind of color, also that deep kind of truth to it, that makes it stick in our mind. For all their musical competence, Flagship just hasn’t hit that sweet spot of uncomfortable truth yet; nor do they quite break out of a sense of formulaic instrumentation. Our favorite track here is actually a bonus track: “Pocket Full of Matches” tends to bend the formula by using a bit of sampling, though the track does not appear on the record, rather unfortunately.

It’s a close call here, but should the Flagship take sail by you, we’re advising you take a pass.

Listen to some of Flagship on Soundcloud right here.