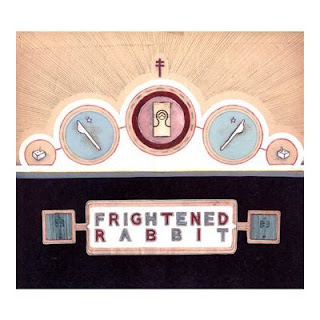 Selkirk, Scotland-based Frightened Rabbit has been faring well on their tours, and no wonder: their fourth studio album brings a selection of upbeat and driven originals to their stage repertoire. Their mixture of straightforward rock and Scottish vocals may not capture the imagination in the age of Flogging Molly and Dropkick Murphys, but the tracks on “Winter of Mixed Drinks” are certainly satisfying: “Skip the Youth” sticks out on these 11 with an extra juicy build, and helps to support the more streamlined tracks, including the energetic break-up “Nothing Like You” and the pleasant pop of “Swim Until You Can’t See Land.” We’re generally adverse to such radio-friendly fare, but here Frightened Rabbit does us better by focusing on singable, catchy choruses that aren’t bland nor overly gushy. The results strike a well-done middle ground between radio-play with a slight indie voice. While not the most original, it’s still a very solid outing. Recommended.