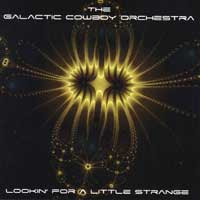 Twin Cities based Galactic Cowboy Orchestra take bluegrass to different dimensions on their first full-length release, “Lookin’ for a Little Strange.” Yet, for a bunch of cowboys, this instrumental release seems to lack the energy needed to rustle up galactic cattle and really hoe-down. Part of it is in the track mixing; this album opens with what feels like a cool-down piece, and the next track, “Minor Scrape,” could fit well as a closing track. But the mixing is only a minor issue, as many of these tracks seem to work in one style: solo and backing musicians. There is little room for interplay here, no call-and-response or duets where these musicians would truly get to play off of each other. To compare it to a master in the field, Bela Fleck and his Flecktones, Fleck plays in every little crevice, mimicking solo licks and jamming even while playing support. The GCO lack that cohesion, and here tend to drag their feet when they should be stomping them. The strongest of these tracks is “Iron Range Knee High,” a country-blues guitar solo in a lemonade-on-the-porch-way, and “Gypsy Grass Stomp,” on which this band feels like they really come together. Still, for the price of admission, we’d hoped to stumble upon some serious crazy virtuoso stuff, and the fact of the matter is that there isn’t the feeling of challenge between the players, and without that lack of drive and innovation, it falls flat. Hopefully their live shows find this energy, because we can’t really recommend this one. Take a pass.