Garrett Pierce’s City of Sand not enough to stand on 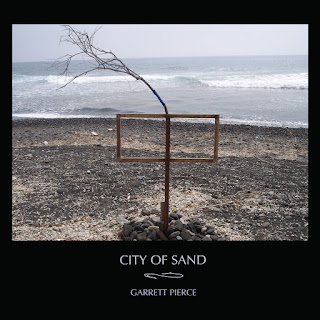 There is some heartfelt, dust-blown balladry on Garrett Pierce’s latest effort. The L.A.-native singer-songwriter employs his gentle yet firm vocals throughout, hitting the nail on the head with the opener “Everybody Breaks” and the title track. These and others are tracks for the more discerning and somber listener: spare, backed simply, and striking the same soft mood as might a light autumn drizzle bring. But for all the reach Pierce’s record has, his voice comes up half a foot short from grabbing our heart. For as simple as the songs are, Pierce needs an exceptionally supple and deep voice to pull off such a difficult album, and it’s that vocal depth that this material lacks. To compare to James Taylor and others of that golden era, Taylor and Co. could handle a wide range of moods, from subdued to effervescent to farcical. Pierce’s album follows the one formula, withdrawn and wistful, and on the one track that attempts to rock out (“The Golden Horse”), his voice is simply not up to the task. It is a pleasant trip to the City here, but not one that we’d imagine you’d be making again and again. Take a pass.