Honey Pies think of England, should think of catchiness instead 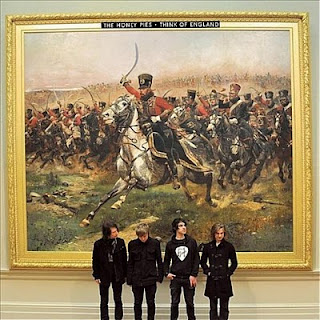 The Austrailian punk (yes, not British) of The Honey Pies is much like any other punk: rough, agitated, and pretty bad (in a good way). Coming off like a punkish Strokes on their debut, The Honey Pies have some good things going for them: a rough, distorted sound, some grit, and that album cover. They also have some detractors, including that band name (my girlfriend thought they’d sound more like Ms. Deschanel). Their biggest detractor, however, is just a lack of song stickiness, that is to say, these songs come and go, and don’t really linger. Though “Get it Right” does, indeed, get it right (with surf guitar sounds, no less), much of the album could well go through you as if it were fiber, minus the health benefits. It’s not bad, but it’s not great, and on this blog, you need to at least be great at what you do. Here’s to the next one, and until then, take a pass.

Listen to “Get it Right.” Or, what the heck, just stream the album.

2011-03-09
Previous Post: Noah and the Whale enjoy this cheery “Last Night on Earth”
Next Post: Pains of Being Pure at Heart stream new album, “Belong”