Interview: The Antlers not just a trophy band 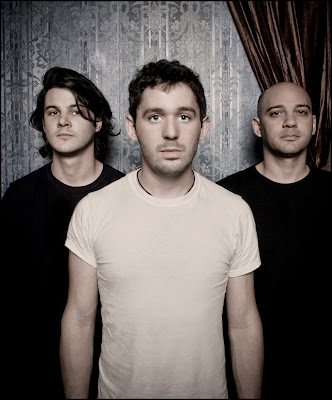 Since last year’s breakout “Hospice,” everything has changed for Brooklyn-born quintet The Antlers. As a concept album about a relationship between a hospice worker and a dying cancer patient, “Hospice” has grown an unusual amount of support and a word-of-mouth fanbase seemingly from the aether. With an upcoming concert at Boston’s House of Blues (with the Editors, 2/18/10, $20-50, www.ticketmaster.com), headman/singer/multi-instrumentalist Peter Silberman found the time to discuss their unlikely album in a recent phone interview.

MK: How has “Hospice” taken off, as far as touring, interviews?
PS: It’s been interesting, and sort of unbelievable. Well, completely unbelievable. I don’t think, in our wildest dreams, we expected any of what has been happening in the past several months. We’re on tour pretty constantly right now, and I remember a year ago, that was not the case. It’s kept us going, it’s helped get the record out to more and more people, and, it’s weird, it’s sort of taking on a life of its own, the more time that goes on. It’s been very weird to get to the point [of having] … large numbers of people coming out to the shows, knowing the record, knowing who we are before we meet them. That kind of stuff is kind very hard to [get used to].

MK: On the aspect of weird, “Hospice” is a very weird record. It’s about cancer and death, and it references Sylvia Plath. How do you think this became popular?
PS: I think the reason it’s become popular is because, at its core, it’s a record about relationships, and it’s not really about any of those specifics. It talks about cancer, it talks about illness, and it talks about Sylvia Plath, and it talks about other characters named Sylvia; but those are sort of environmental. They’re context. I think that was sort of what I wanted to figure out with this record… what I was most curious about with this record was …if other people had had this kind of experience non-specifically, just an emotionally abusive relationship, or just a dysfunctional relationship that is not necessarily the kind that is always talked about. That’s not as well understood as physically abusive relationships. I expect the amount of support that’s come from it and the amount of people being able to relate to it is really encouraging. It’s really surprising.

MK: I’d like to ask where the idea of “Hospice’s” narration came from.
PS: It came from a lot of places. I mean, in trying to write about that kind of relationship, I was trying to make an analogy. The one that sort of fit perfectly was one of hospice care, and sort of taking a job that is so completely selfless, and then sort of imagining that as not just a job, it’s a relationship between the hospice worker and the patient. In a way, our culture depicts terminally ill people as perpetually hopeful or optimistic, or feeling as if they have a new lease on life, and I think realistically, there is also the attitude of bitterness, feeling cheated out of life. Not having any desire to see that bright side. If there is a bright side; maybe there’s not. When those two things collide, selflessness and bitterness, the results are interesting, to say the least.

MK: I noticed that the narration is well-written and fleshed out. Have you painted or written stories before you got into music?
P: I was sort of raised in a family of writers, surrounded by literature all the time. I do a little bit of writing myself, though it’s never things that I’ve finished or put out there in any way, shape, or form. As far as writing goes – songwriting – it’s found more inspiration in literature than necessarily other music. Sonically, I think music is the inspiration, but lyrically, I think…

MK: It comes from a more literary place?
PS: I think so. I think that could be attributed to the fact that there’s so many lyrics in “Hospice,” but at the same time, I think there’s a way to do it more sparingly and more minimally. I think there’s a lot of freedom there.

MK: Speaking of freedom, you’ll be touring Europe again in March. Anything you want to see?
PS: The best part about Europe is how unfamiliar it all is. America is great to tour in, but we know how America works, we all grew up here. Europe is all very unusual, in a really great way, because you feel like you’re absorbing a lot, even if you don’t fully understand what you’re absorbing. We’ve often become attached to some places overseas, kind of places that feel very homelike… London and the UK, Dublin… it’s good to feel cities along the way that you feel can be your second home.

MK: I’m going to shoot a stupid question at you.
PS: Okay.

MK “The Antlers”: is it moose antlers, deer antlers? Some kind of trophy?
PS: I don’t know at this point. The thing I always go to is this Microphones song called “Antlers,” and I think that might’ve had something to do with it. But I don’t have a very good memory of that period of time in my life, so I don’t really know how this name came about. I just remember thinking “that’s fine, it’ll stick,” and it stuck. Band names are really tricky, because it’s pretty likely that you end up hating your band name. I’ve been in a lot of bands, and I’ve had a lot of band names, and I’ve hated them all, and what you want more than anything is a band name… that you can just come to ignore. Something that you don’t cringe when you are stuck with it for ten years.

MK: What band names have made you cringe?
PS: Ooo. Let me think, there’s so many… I was in bands when I was really young, so those were especially bad. I think when I was probably about 12, I was in a band called Nemesis, but we spelled it totally badass-like, “NEMASYS.”

MK: You were just a kid. You can’t really blame yourself for that.
PS: That’s true. In retrospect, it might’ve been cool at the time. Looking back on it now, not so cool.