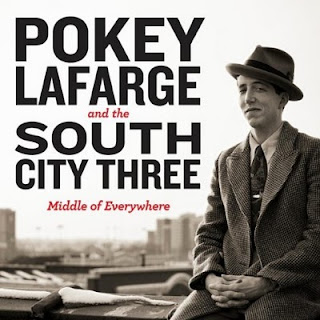 Style. These guys are all about style. And Lafarge + 3 certainly have it: they’ve got spit-shine shoes and some knee-slapping grooves. On Middle of Everywhere, you get the pure distillation of early ragtime blues, crystalline, unadulterated, and most definitely traditional, in every and any sense of the word. And, having met this outfit, they dress the part incredibly well; all that’s missing is a whistlin’ of Dixie. But enough of that, you want to know why we adore these guys but don’t quite obsess over their music. As faithful as Lafarge and his South City Three are to the genre, they feel – again, that word – crystallized: they don’t alter, they don’t take other influences and make this music their own. Instead, one feels the presence of a time capsule: ancient and quaint, valuable as well, but we don’t want a history lesson. That’s what the Library of Congress archives are for. We want something new and dynamic and exciting, and although Lafarge plays the role – and very well – there isn’t quite a sense that he plays from the heart. Look at it this way – the blues have endured, and will endure, as long as there is someone to interpret them, not archive them (Muddy Waters, Hendrix, et al.). Try it because you’re traditional and still living in the early 1900s, but otherwise, take a pass.

Listen to some tracks on their site. Right… around… here!