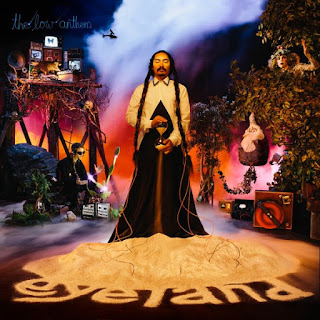 We generally try to listen to each album we review here five to ten times as a minimum before we review it. Sometimes there’s something we miss; but here, on the Providence, RI band’s fourth studio album, we’re pretty sure they missed something. We could only manage three obligatory listens of Eyeland before declaring the project overly ambitious, trite, arrogant; and defunct.

What’s up with the band that made the glorious 2009 Oh My God, Charlie Darwin? We can’t answer that, but if we had to take a guess, it could be that their lush folk sensibilities have become overrun by a band of overmixed Sample Trolls. This album is an electronic experiment – one not pleasing to the ear – that may signal some sort of growing pains on the part of the Anthem, or perhaps something far worse. As far as tracks go, the starter, “in eyeland,” is the highlight of the bunch, with a pleasant, wide, spacey feel. It takes its time, and gladly brings us along. The remainder of the tracks, however, rush from lo-fi annoyance (the punk-like, not punk “ozzie”) to static-fuzz filler (“wzgddrmtnwrdz”) and early on in our first listen, perhaps even at “wzgddrmtnwrdz” (likely sooner, though) we were asking the Low Anthem aloud “What are you doing?” We can only guess at their intention here, as they did not respond (they were not present).

Overall, Eyeland is one of those albums that makes us question record producers willingness to go along with a band’s ambition at the expense of the listener. Ignore what NPR might be saying, they’re simply wrong; give a big berth, and take a wide pass.

2016-06-27
Previous Post: So You Can’t Get a Ticket to the Newport Folk Fest…
Next Post: Do It Yourself-er Nigel Thomas Does It Well on Travelling Man