These guys’ album has been stuck in my head the past week or so (photos courtesy of Marc Brigante): 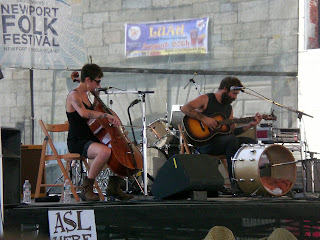 Three clues: that’s both of them, they’re heavy but acoustic, and stationed in RI (currently). That’s Brown Bird right there, and if you couldn’t tell, well, I couldn’t either; MorganEve cut off her hair! Thank god David pointed her out to me, or I never would’ve known. Their album isn’t out until October, but if I were to take a guess, I’d say the audience liked it. And that’s putting it blandly; there was a definite mosh-pit going on during “Ragged Old Town,” and I grooved the heck out of “Bilgewater.” A butterfly passing by landed on David’s hair during “Town,” though I’m pretty sure he didn’t notice; I think that betokens more good luck for their album “Salt for Salt.”

This next act we caught at the Narrows in Fall River, MA way back in aught-nine. The crowd then was appreciative (and I got a signed tee), but tragically small; this time around, they finally got the recognition they deserved: 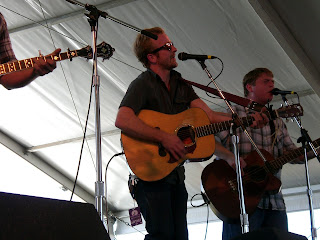 Trampled by Turtles! Quite possibly one of the most brilliant names in the industry (and check out how they came up with it), you can see Dave S., Tim on the now- patched- up bass, and Dave C.’s arm on the left. These guys… well, let’s just say if you like the kind of bluegrass playing that puts blisters all over your hand, these guys are the masters of that. Dave joked about the weather being conducive to breaking strings, but honestly, guys, if you’re playing 16-th to 32-nd notes at, it must’ve been over 200 bmp, then yeah, expect to break some strings. And to re-tune after every song. That’s like complaining about changing tires during the Indy 500. After their incredible performance of “Wait so Long,” the crowd demanded they come back for an encore, which set the whole stage off by 10 min for the rest of the day. Jeez, what show-offs. 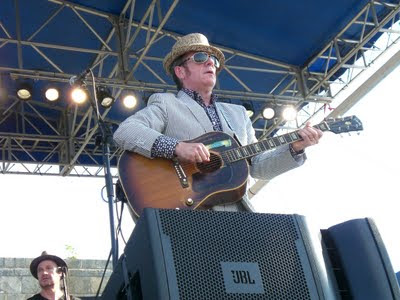 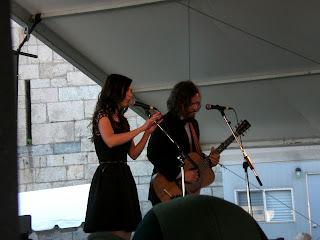 A snap of the Civil Wars:

Joy was sweet as pie when I met her in the morning, and John Paul was just as nice when I caught him on the way to this set. Do we like the Civil Wars? I don’t know, maybe a little. Tiny bit. We could only stay for a brief glimpse of this soulful duo, and I could hardly tell you what song it was they were playing, because they kept cracking each other up. But I know it killed me to have to cover the other acts during their performance, though “Barton Hollow” had my attention on the ride back. 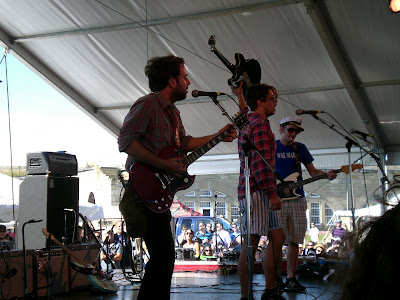 These guys were nuts. These guys were crazy. On the Quad Stage in the Fort, they didn’t have the largest crowd at that stage, but theirs’ was the most pumped; everyone knew who these guys were, and they were on their feet before they even picked up their instruments. Middle Brother, a collaboration of Taylor (Dawes), Matt V. (Delta Spirit) and John J. McCauley (Deer Tick – all D’s) took it all out with material from their self-titled release this year. Why were these guys our pick of the weekend? I have no idea. Let’s just say Matt V. jumped it up a notch (should be in the NBA, that guy) and was dancing with a lucky lady in the audience. No small feat, considering those four-foot photo barriers (how did he even get back?). These guys know how to party, and we’re going to go out there and say we liked them first. We’re not the huuuugest fan of guest Jonny Corndawg (not pictured), but he’s pretty damned congenial and unexpectedly polite. All that crazy facial hair kinda threw me off. And he mistook me for a Trampled by Turtle’er, which doesn’t hurt. I don’t think I have that much beard, do I?

So we started this coverage with a bit of the stinky underbelly of the business yesterday. The musicians love it, certainly, but sometimes they come across someone who wants to love it a bit more. If there were budget for a “Man of the Hour” trophy on this blog, it would go out to Taylor of Dawes. No, we didn’t really dig his album that much this year, but after overhearing a bit of a social, erm, faux pas on part of another apparently tactless media-type, right after his sweaty, heat stroke-inducing set, we’re going to say he had a #@%-load of tact for holding his tongue and not flipping out at the woman in question. (Where was I? Waiting for a signature from the guy… trying not to overhear while he was venting at his fellow band members.) That takes – grandpa word – character, man, and though I probably shouldn’t’ve caught it, well, I felt it appropriate to share that with my readers. So, like, 10 more people know. And after that, he jumped back on stage to jam with this dude: 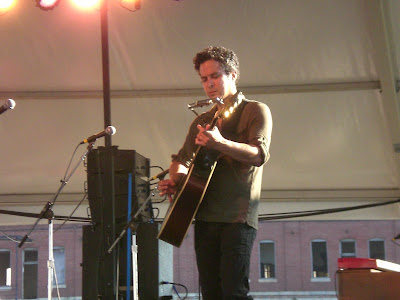 (Love the photo, Marc!) He played a whole slew of songs from his “Hold Time,” and did an encore, but I’m sure you guys can catch all that on NPR. He’s a pretty big deal, I’m told.

So, what happened with that signature? He assured me I really wasn’t being a dick for asking for it, and maybe we’ll reveal where it’s going to at the right moment…

So thanks for stopping by! Keep in mind, if you’re in the Boston area and are traveling to any big festivals on the East Coast, we’d love to hitchhike with you, as there’s no travel budget for the blog. Actually, there’s no budget at all. And pay for my room and meals, too. Keep on truckin’!