Myself and the photographer-for-the-day, Dave “Bizarro” Cordeiro – all photos copyright him, by the way – arrived on-site early enough to get the lay of the land before all music broke loose. We stumbled across a drummer bathing in one of the sinks, and were regaled with the typical tales of the touring musician: a pinch of sleep, warnings about body odor, and the scramble to cover hundreds of miles to the next gig.
I wanted to start this with a little perspective. I think every bit of pure fun should have a pound of that, lurking somewhere.
But despite the untold, rather grimy side of the life, this is the Newport Folk Festival, which is all about the more glamorous aspects: hanging out with your crew on a summer weekend; running into the random artist peeking through a telescope or catching their favorite act; and, of course, the music itself, thick and hot as the humid July air. Life is about making decisions, and having a rather limited (and admittedly lazy) staff to cover 21 hours of music this day, we had to make some. No offense intended.
This is where our day started: 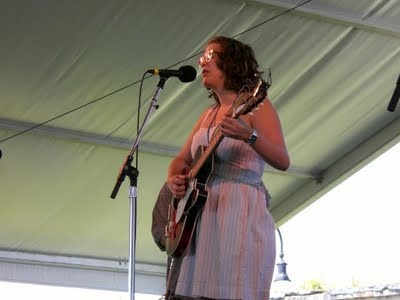 This lovely lady with the cat-eye glasses came straight out of the 1950s – perhaps literally – with her rollicking brand of retro Rock-n-Roll. The quartet known as Sallie Ford and the Sound Outside (SOS) took to the Quad stage in the middle of Fort Adams, and we’ve got to say, she’s got bounce and energy in that voice of hers. Remember the diner scene in Pulp Fiction? Tarantino would’ve died to get her in there, no joke. But not too far into her performance, the power cut on this bobby soxer. What’s a girl to do? Strum on her un-electric guitar and keep on singing. Thank god it came back on for “Cage.”

Now, these guys caught us off-guard: 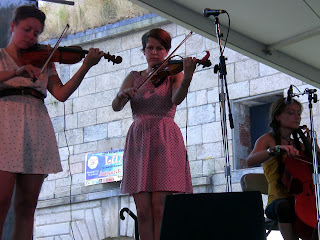 Well, gals in the pic. Count that: two violins, one cello. On the left of the stage: two trumpets, a baritone horn. That’s six, and not quite half of the baker’s dozen that is Portland, OR’s Typhoon. We were blown away by the grandeur of their sound, which is orchestral with indie vocals (a bit more straightforward than Sufjan Stevens, but long and well-paced), and can’t wait to get their full-length when it comes out. They’ve got a new EP out now, and if you close your eyes and wish, maybe it’ll sound like they’re playing just for you. Or you can just catch them on David Letterman August 4th if you have patience enough.
The pics don’t really do them justice; they’re far cuter and nicer in person. (Call me!) 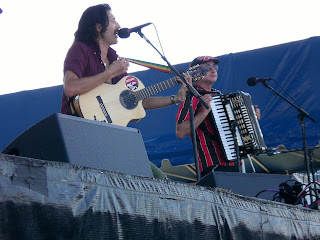 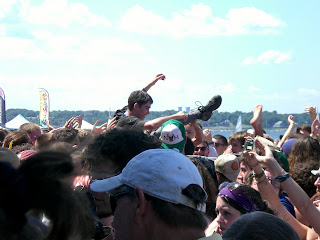 And here is the crowd on Gogol Bordello:

I’m not sure we need to add a whole lot more. But just to humor y’all, they play the sweaty gypsy music you’d find pounding from the open windows of a basement bar in rural Europe. It’s as intoxicating as the dark liquor they serve there, and Eugene’s accent pours just as thick. We were almost tackled by some crazy What Cheer? Brigadiers who, unblamingly, were musically possessed backstage. Moving on. 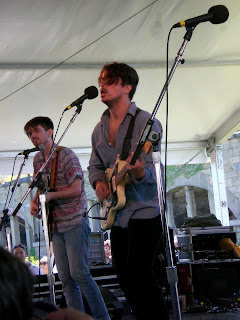 These fine young chaps are Delta Spirit (well, 2/5 of them). That’s lead-man Matt Vasquez with the hair in his eyes. Probably the most direct way to describe them is to say they play rock; pure, loud, unabashed rock. It’s our first listen to the remaining third of the collaboration known as Middle Brother, and if you didn’t feel the raw power of “Ransom Man” that day, alas, you probably never will. Needless to say, the guys laid it into the crowd after a few songs and Mr. Vasquez shred the bejesus out of “People C’mon” vocally. We’d love to say that was the highlight of our day but to be honest, it really belonged to this lass, and probably always did: 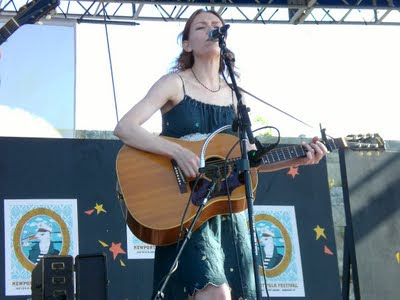 Ah, Gillian Welch, is there nothing you can’t do with your plain-Jane vocals and a simple acoustic? She and David Rawlings (you can kinda make out his guitar on the upper left) took out most of their new album, maybe with a few handclaps added (“Six White Horses”), a sprinkle of self-effacement and perhaps some exhaustion in there, too. Having missed some acts we were dying to cover (Pokey LaFarge, Devil Makes Three, most of Tegan and Sara), Welch made that right again, as it was just refreshing to listen to something so simple and uncluttered by the sea. 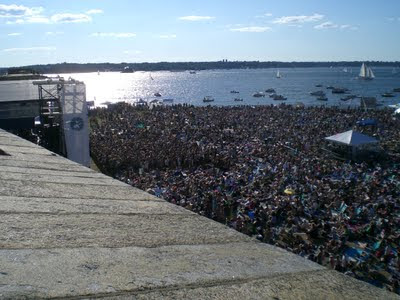 That’s all of them. Can you spot me?
Come back for part two!