By: MadMattKeefer
In: _Concert Reviews, _Newport Folk Festival Saturday 2010, Live Music
With: 0 Comments
As you may have recalled last year, we’d reviewed the Newport Folk Fest on Saturday. Well, this year, things are a bit different (it’s still just a Saturday). We’ll show you what we mean: 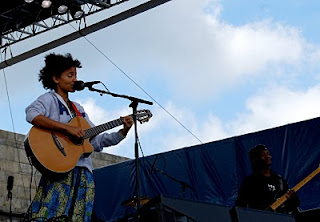 Taken by the lovely and talented Allie Runnion (www. allierunnion .com), we’re now able to provide you with concert photographs. As some of you may know, this particular artist is the lush and political-minded Nneka (percussionist Gary Sullivan, bassist Emmanuel Pokossi), who opened on the main stage with her Marley-tinged “Your Request.” Note that she’s wearing a sweatshirt over that dress; it really was a bit cool to start. We were able to meet up with the chilly musician back stage, and she is as sweet and polite as she appears, which is unusual given the often haunting nature of her music. Though the day threatened to rain (again, if you recall 2008), we believe it was in part Nneka’s plea for peace and love that kept harsh streams of water from pouring through the festival. Thanks, Nneka! 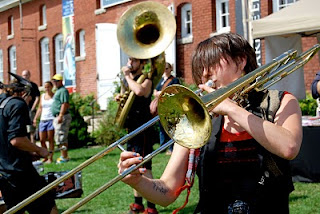 Surviving random attacks by Providence’s What Cheer? Brigade (Susan on a vicious trombone) and frequent run-ins with Jim James (who was either watching every performance, or maybe had clones), there were three stages of folk, rock, and even some Girl Scout rap (“Dough for Dough” by Liz Longley). Here are the highlights:

Horse Feathers, who we interviewed for the Mercury, was genuine and amicable before their performance. With a packed crowd on the third stage, they were probably second only to Jim James (shoulder to shoulder – we couldn’t get close enough for a picture) in drawing a crowd away from the main stage. While it was tough to make a decision during the Calexico/Horse Feathers/ Yim Yames trifecta, we found some time to catch the Portland, OR band play a few off of their 2010’s Thistled Spring. Asking for more high-end from the engineer, here’s Justin Ringle’s quote of the day: “You don’t hear people say ‘more banjo.'” No, you don’t, Justin, and that’s why the world’s in the trouble it’s in. 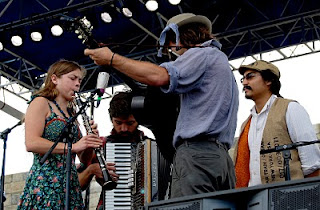 (L to R: Jocie Adams, Mat Davidson, Ben Knox Miller, and Jeff Prystowsky) On the main stage, Providence’s The Low Anthem performed some dark new material off their album-to-be (hopefully early next year). If you want a mini-spoiler, it will include a song about pill-popping, some brass in the form of a tenor horn, and cell phones; Ben Knox Miller called himself and played the interference off of the cell phones into the mic. If you want to know what it sounds like, it’s akin to the sound in a 50s film when you see a UFO take the screen; a spacy, whistle howling, and we’re quite excited to see what they’ve come up with for their next release. 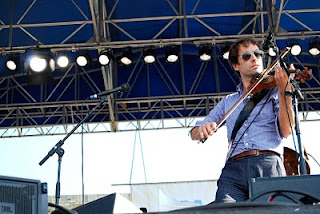 The birds came out for Andrew Bird, perched atop the fort wall, apparently to catch one of the most impressive performances of the Festival. Mr. Bird strutted about his one-man show, recording and looping for the better part of an hour. Actually, there were two people in his band, Mr. Bird and the guy who kept straightening his double-gramaphone (it really spins!). It’s featured on his video of “Imitosis,” which you can spy on YouTube.
By the time Calexico joined him, he’d octupled his number onstage for “Skin, Is My,” and a few others. (We should probably mention the real quote of the day at this point, during Caleixco’s set: guitarist Joey Burns to an especially loud and annoying woman in the front – “Nice to hear you. Thanks for coming.”) Let it be said that the pairing of the two, Calexico and Andrew Bird, was, in our opinion, the highlight of the day, as Spanish-tinged horns just seem to work with Mr. Bird’s eclectic electronic stylings. It was, in a word, fantastic.

Thanks for joining us this year, and we hope you enjoyed our coverage of part of the (as always) fantastic Newport Folk Festival. Take it from us: buy or finagle your way in, because it’s worth it. Or you can catch it slightly less than live on NPR, at www.npr.org/newportfolk. We’ll leave you with a bit of Where’s Waldo a la Newport-style: 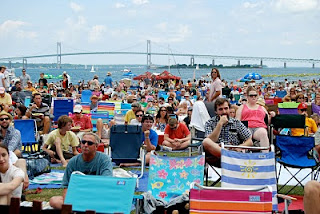 Hint: look for the guy who looks like a critic. Thanks again, and catch you next year!