Dead Confederate quite alive on latest 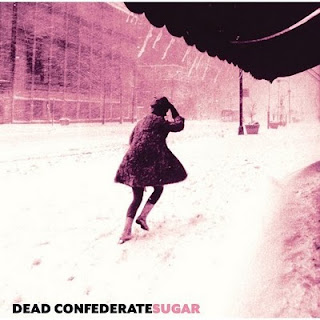 With great grungy pop songs such as “Run From the Gun” and “Giving It All Away,” it’s not difficult to imagine a world in which Athens, GA rock group Dead Confederate could hold their own against My Morning Jacket and other top current rock acts. While “Sugar” doesn’t quite measure up to MMJ’s “Evil Urges,” still the above tracks showcase a band capable of jamming, crafting songs, and performing memorable songs. While “Run From the Gun” and “Giving it All Away” are the exceptional tracks here, there are moments where the material lags, such as “Father Figure,” which shows a band that needs more experimentalism and consistency (easy enough to pull off, right?). Nonetheless, these two tracks are worth the admission, especially for fans of post-grunge, Nirvana, and the like. We’re hoping this band will take its strong, fairly mainstream-friendly sound and develop it, as they certainly have the potential to make waves in the long term. A great second album, and a band to look at a couple releases from now. Recommended.