It’s that dreaded music moment: the morning after. Okay, so technically, yesterday was the morning after, and it’s well into the afternoon right now, but that same dread carries over pretty fierce. Still, it was four stages of acts (one more than 2011), about five acts per stage over about six hours… that’s getting folked pretty hard, we’d say.
We’re still recuperating from a bludgeoning of music, so our mind’s still foggy. We roughly recall one Julia Markowitz as photographer (height? weight? age? still too foggy to guess) so many thanks to her for strapping a camera around (yes, all photos copyright JM) and dragging us around by the ankle. The first thing we remember about that whirlwind of a day was this: 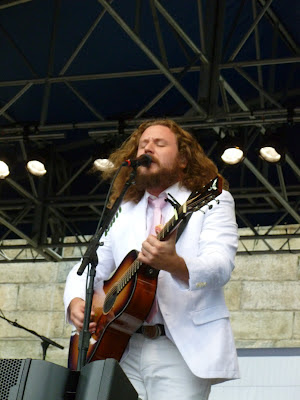 My Morning Jacket’s headman Jim James, if you didn’t know. He thrashed and thundered, cracking the skies open, and we could’ve used some jackets while he… wait, that should be the end of this post. Sorry, still clearing up, so let’s get back on track.

These folks opened the main stage, and if you’ve kept up with us the past six months, you’d know we adore them (and their 2011 full-length) most immensely. Without further ado, MorganEve with that short ‘do: 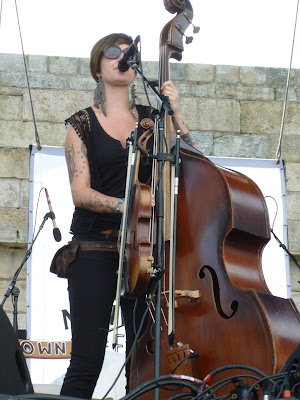 And this time, she’s partnered with Dane Cook: 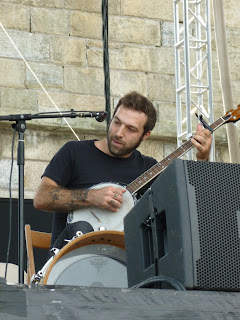 That was too mean, but he does kinda look it; apologies all around regardless. With Mr. Lamb of Brown Bird (minus the beard, oh well), the duo moved up in the world – or in the NFF, anyway – and showcased some fantastic tracks off of “Salt for Salt.” Debuting a couple new tracks, presumably off of an album-in-progress, the crowd was slightly less enthused. We’re not especially worried, as Brown Bird’s song construction is, simply put, crazy: shifting tempos, searing tempos, choruses into bridges into instrumental jams into different bridges into transforming pickup trucks… well, you can’t entirely fault them for not having caught up with their own songs yet. Those need some spit polish, but you can almost hear the spittle flick off David Lamb’s lips during “Bilgewater,” “Cast No Shadow” and their other more-practiced tracks. Yeah, they definitely got those ones down pretty good.

We’re honestly not trying to spam you guys with pics, but we liked this one. 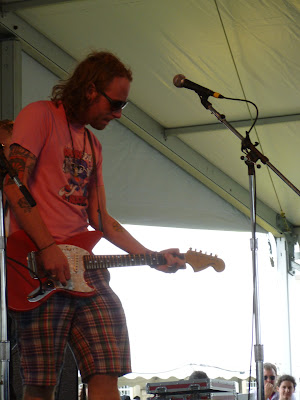 With all the good pics to choose from, it’s tough to make decisions. John McCauley of Deer Tick fame. He’s only been on the scene, so to speak, for four years? and still, he’s got such a depth of material to dig from, between four albums (full-length… isn’t that crazy?) and enough collaborations in random places that we actually lost count – that part’s really crazy. Busy bee, yes. But it makes for a solid set, and even with a screeching opener (probably to scare away newcomers), it’s quite divine listening to new stuff (“The Bump”) between some old stand-bys (“Art Isn’t Real,” “Easy”). It also doesn’t hurt to bring along a mischievous elf, too. 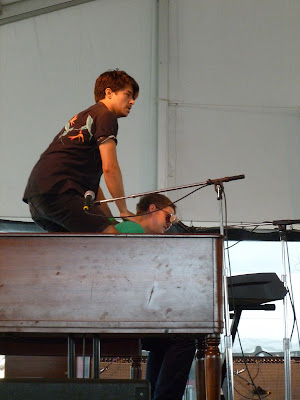 Whatever happens, don’t let it get in the piano!! We’re not entirely sure why Delta Spirit’s Matt Vasquez felt the need to incite a general riot, or how he got through strict Folk Fest security (empty guitar case?), but the audience went crazy. Again. You’d think they’d put a tracker on this guy after last year’s mayhem.

Unfortunately, their set overlapped with Alabama Shakes. They say you only get one first impression. 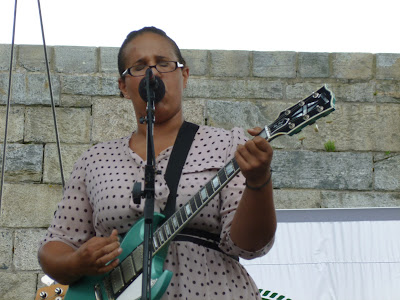 Ours was of a middle-school teacher who liked that “seafoam” was a color. Well. Perhaps we were a bit unfair in showing a picture first; what we should’ve done was offered a quick stream of “Hold On” that day. There’s probably one word to describe Brittany Howard’s vocals, but we’re not smart enough to cull it down, so here are two: pure soul. The honest wailing that sounds like heaven and comes from elsewhere. We’re not sure NPR’s mics could catch half the hit her voice gave the crowd – and us – but this girl’s got pipes, and you’ve got to hear them live. Some things just don’t transfer well any other way.

We’ll try not to dawdle much more, so let’s start wrapping it up. The gentlemen Dawes. 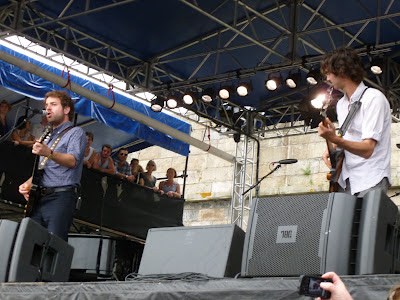 We could spend half the post talking about their performances here, but instead we’re going to suggest you hunt down an NPR stream: “Fire Away,” “How Far We’ve Come.” Etc. etc. The weather had been glooming over most of the day, and we were positive it was going to hit while these guys were up. Fortunately, it relented even during 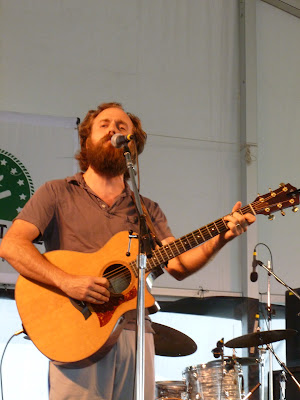 Iron and Wine. We’re not attempting the cheap rain + iron kind of joke, we’re on a tight schedule and weather’s not great, but we will admit much enjoyment over “Long Black Veil.” We could argue Iron and Wine vs The Band vs Johnny Cash vs Nathaniel Hawthorne (the classic writer… too obscure?) but the cows would come home, and someone else would have to put them away cause we’d spent too much time arguing with ourselves. We do much enjoy Sam Beam and suspect fellow I+W fans to enjoy the fresh re-arrangements of “Boy With a Coin” and “Lion’s Mane” et al. We’re still sticking with “The Creek Drank the Cradle,” but this set was satisfying.

We almost forgot! No more pics, we promise but scroll up to that first one – yeah, the Jim James one. Now back here.

That set thundered. Those hardworking folks who bring acts to the Festival – especially NFF producer Jay Sweet – were just plain stoked to land My Morning Jacket this year. As if to celebrate the occasion, Mr. James donned a white tux (plus boutonniere – yeah, we had to look it up) and accented it with a black cape for the more blasting parts of their setlist. We were quite content to watch the weather swirl about, twisting into a space-out Pink Floyd jam-frenzy version of “Victory Dance.” Miss Ala. Shakes herself took the stage – some of those rumbles from maybe above the PA system – and when fellow Monster-of-Folk Conor Oberst came aboard, there was no doubt it wouldn’t hold off. It opened, and poured.
The tease.

(Now stick around for part II…)