The Olympics are blaring in the background; we admit, it’s tough breaking away from all the young athletes giving their all. All the hard training, focus, skill… there are a great many talents that require an exceptional heft of dedication, not just performing music. 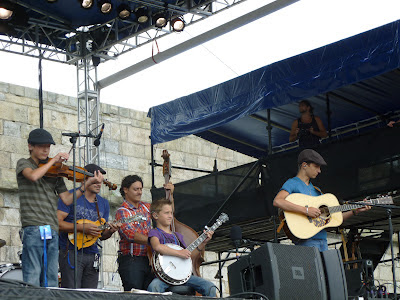 So we figure we’d showcase this exceptionally young banjoist (all photos © Julia Markowitz). The Mizzone trio (fiddle, banjo, guitar) could just as easily have named themselves The Middle School Bluegrass Bunch – instead, they went for Sleepy Man Banjo Boys. Better ring perhaps. Jonny, at 10, is the youngest of the soon-to-be high schoolers, and we just can’t get over how this pic makes him looking lahk he chawin a pinch o tobaccy. It’s pure, old-fashioned bluegrass the way Ole Miss remembers (despite the NJ tags), minus the brawling and spittoons, of course. C’mon, they’re only kids!

And Sunday was the day of the banjo. Between R.J. Storm and Sara Watkins, you couldn’t hardly swing a dead cat and not get some bluegrass on it. Thank god Trampled by Turtles followed up on the main stage. 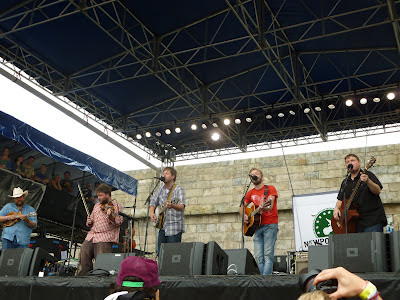 Damn, another banjo band. Well, there’s no way around it sometimes, and now we’ve learned to stick above the Mason-Dixon (with minimal police involvement). These guys are great, but a quick admission is necessary: we never sunk in to their records. They’ve got a new one out this year, Stars and Satellites, and having listened to one off of it, we’re going to say that everything you need to know about the band is onstage. They have an absolutely insane live set – bluegrass tinged with a Jimi Hendrix rock-mentality (not a surprise given their pasts) – and they apparently need to keep above 60 notes-per-measure or Sandra Bullock’s bus will explode. We might’ve reported on them last year at the Fest, and maybe it’s not technically possible, but they seemed to blaze even hotter this past weekend – probably it was Ryan Young’s domination on the fiddle solos (second from L) through the set. Our inner boyscout was surprised that thing wasn’t a tinderbox in his hands: honestly now, your “woodsman” dad could start a forest fire with less effort. Check out this live set, especially the cover of “Tonight I’ll Be Staying Here with You,” and then go see them live. A lot of their tour seems to be selling out, though.

H+H: Head and the Heart. Here: 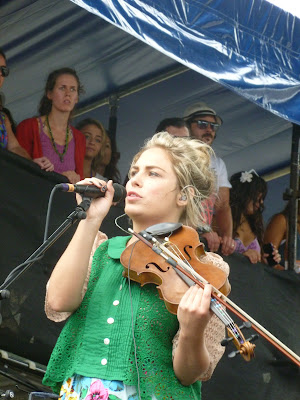 We downloaded their album a couple weeks before the Folk Fest, and yeah, it was worth every dime (definitely worth more than those two bucks). After the Turtles brightened up the stage (“I don’t think it’s going to rain,” sayeth Turtle Dave S. – and lo…) Miss Thielen et al. took advantage of the sunshine to bring out their own. What started out to be a good performance – a bit too faithful to their debut – quickly became a “turn it to 11” kind of moment toward the end. Yeah. We felt a bit guilty about not huffing over to sample most of the acts, but really, The Head and the Heart’s performance was one of a handful that made us feel much better about sitting more of them through.
Besides, not like we’re real media coverage, anyway. The last few, leading up to the smashing “Rivers and Roads,” oof. 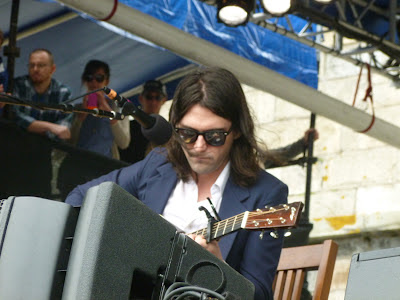 That’s Conor Oberst. Some people love him, some hate, and if you have more than a couple Bright Eyes albums then we’re guessing you’re in at least the first camp. Good, we are too. It was misting as he started up, yet another toothless threat, and we quite (quite) enjoyed “Classic Cars” with Swedes First Aid Kit. We might’ve possibly appreciated Jim James returning the favor of a guest appearance (one of several), but we especially loved “Lua” with the Kit’ers. It’s a gorgeous song, no way around it, and even though Bright Eyes might infuriate some of you, we especially you check out this set at least just for that one.

Well now, that’s it for our Newport Folk Fest coverage this year! And, we do want to remind y’all that the stuff at Fort Adams these three days (no Wilco coverage on Fri, sorries!) was maybe half of it. Yeah, Jackson Browne did close up this day… moreso the rain did, though… but we heard some incredible things belted from him at the Newport Blues Cafe. Check out next year, and even if you can’t get in (tics were sold out months ahead) keep your eyes on all those satellite concerts around the Folk Fest too: Oberst at Jane Pickens, Head and the Heart at Calvin Theatre in MA, Dawes… gee, next week. It’s a veritable downpour of talent in the area, and with an uncountable number of years of dedication hopping from stage to stage, well… we’ll make some sort of lazy comparison to training for the Olympics, but we’ll spare you that. We haven’t been at this all that long, so take this for what it’s worth, but this year’s lineup was the strongest we’ve known. Let it also be said “quality over quantity,” and as far as other festivals go, Newport’s digs deeper than we’ve seen to find new acts. Just check out the 20+ groups on each of Sat. and Sun.; that’s quite a lot of glossing we had to do. Okay, last thing to be said: keep you up to date on next year’s, and let the good times rock-and-roll.
-A Very Tired Mgmt.