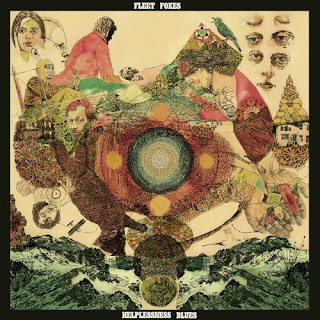 As one of the most anticipated albums of the (indie) year, the Fleet Foxes have their work cut out for them. Having delayed the release of Helplessness Blues since announcing the sophomore album last year, critics and fans alike have been wondering: is this second release going to be as brilliant and polished pop-perfect as their self-titled debut? The answer to that question, is this: Helplessness Blues is good. Quite good. Rife with their celestial male harmonies (which are most of the show) and clean, classic guitar, Helplessness Blues will repay fans itching for more Foxes and undoubtedly satisfy the newcomer. While this release may come up half a step short of their debut in terms of song polishing (a whole step in lyrics), the Foxes make up for that by reaching out a further in their song construction. With “The Shrine/ An Argument,” the eight-minute mini-epic on side B, fans (and critics, too) can’t help but to prickle with the potential of this band. Does this track betoken a longer form for the Foxes? Will they consider, perhaps, a concept album? Hopefully yes and yes, but regardless of what that future outcome might be, there are still plenty of fantastic baroque pop pieces here, certainly enough to highly recommend the whole.

Stream “Helplessness Blues” on NPR until the release.