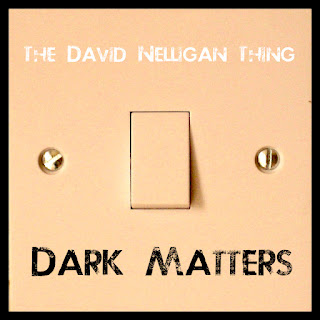 The folk-pop that is the Dave Nelligan Thing reminds us of Chris Knox for some reason. The vocals are different, and Knox is a bit more outgoing in the instrumentals, but in both there is something organic, low-fi, self-described DIY, somehow. It’s playful, it’s unusual, it’s that strange kid in the back of class who draws pictures of chocolate tribbles because the idea amuses him. And that’s what we get from Dark Matters, the first album under The Dave Nelligan Thing from the Cork, Irelander. It’s an unusual journey, but not necessarily one worth repeating.

We think the main strike against this album is the vocals. Mr. Nelligan isn’t the strongest singer, and therefore for each song he must double/ triple up his vocals to give them some weight. His voice has something of a drone to it, and adding a few more layers of that only exacerbates the problem. Now, true, this isn’t an album that lives or dies by the quality of the vocals; it’s very dependent on lyrics and songwriting. And there, the Thing is passable. You get strange snippets of concepts, like “Hell Is a Waiting Room,” the main idea of which is pretty self-explanatory; strange lyrics, “My head’s full of marbles rolling around” (from “Feelings Unlike Words”). It’s not quite up to Jim O’Rourke standards, and not as poetic as Wilco, but it’s striving for the same thing. Sonically, it’s hit or miss: “Noughts and Crosses” works, and “Dark Matter” is just too esoteric to really relax as a song. Again, we think stronger vocals would help open up these songs a lot, and likely “Been Burned” works the best of the bunch.

For a total indie, it’s a good effort. There are serious decisions made lyrically and in the direction of the music. But we don’t feel The Thing is at the level of some-Thing you absolutely should hear. We’ve still got a link at the bottom, so try a couple songs; otherwise, take a pass.

Check out the full album on the bandcamp page.