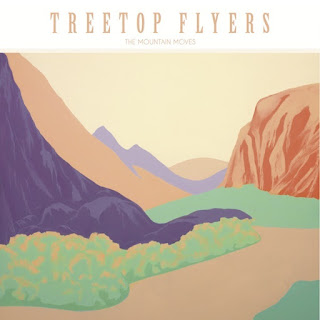 We think Treetop Flyers wins the “sounds most like Fleet Foxes” award this year. It’s all about that opener for us, “Things Will Change,” with its cheery guitar and constrained harmonies, acoustic perfection. Where, then, have all the pieces gone after that song? That’s the question we’d like to put to the London quintet, because the rest of what they’ve presented here is merely average teetering on just above, passable but certainly not exceptional. They dropped the ball! And that’s dangerous to do from the treetops.

To compare to the Foxes, both debuts use similar instrumentation, talent and song stylings (vocal-driven, harmonies, folk skeleton). In fact, if we were to get a computer to analyze the two, it’d probably put them on an level playing field. But they’re not. What do the Flyers lack? It’s that rare quintessence of music, it’s the reason why we listen to music: the why. “Why” puts pure joy into performances, it makes a flatly written song engaging, it gives drive and purpose; and, no, while the gents do not lack this altogether, they lack so much of it that what could have been a brilliant album is simply… meh. Shrug. Compare the opener to “Postcards.” The latter should be on the same level: it’s strange, it’s got shoobie do-wahs, it’s new and inclusive of older styles, but they don’t pump it with the same kind of lifeblood, and therefore it doesn’t breathe and flex and show how great it really should be. Maybe they got tired, or maybe they got lucky with the first track. In any case, we’re disappointed to have an okay album here.

The Mountain Moves does all those boring expected things a folk/pop album should do. We suspect you’ll pick up on this, too, and we just have to give it a pass.

Check out many songs on their soundcloud page!