Self-Release Medwed Is Own Man on Free Man 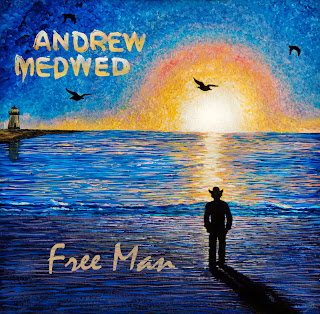 The cover may not look like much, but inside Ukranian Medwed debuts a rocking, stomping sense of musicianship. We appreciate the diversity of his songs, even if we don’t appreciate all of them, and the fact that he can go from garage-y swamp music to pop/rock in a track or two impresses us. We also appreciate the crafting of his songs: they’re full, they’re completely realized and written well. We’re going to admit, there isn’t anything here that surprises or astonishes us, other than the fact that this is a 100% self-release, but when we smell talent, it clogs our nostrils. Medwed has the musical potential and flexibility of half the indie releases we come across here combined (even if he does have some ways to go).

“Whiskey & Rain,” the single off this album (and check out the video below) is a brilliantly executed Jack-White-ish rocker that pumps through heavy on the low-end and drives like a smoky pickup truck. Our next favorite, you ask? – would have to be “My Demons,” the swampiest, garage-iest feel on the album, another Jack White-inspired track that pumps the smoke like a… a… mogwai spewing out gremlins. That sort of worked. Anyway, it’s wicked and dark and delightful. One of the exceptions on this album is “Skyline,” which is simply too poppy for our tastes here, and comes off too mainstream radio (ie punk-pop-ish). But still, for a full self-release, the tracks here are well-mastered, well-executed, and well worth your time.

We give Medwed our thumbs up here, and expect to see more of him in the future. And next time around, hopefully he’ll give the big names more of a run for their money; recommended.

2013-12-14
Previous Post: Admirers Have Little to Admire on Debut
Next Post: And now! Our Belated Top Two of Two-Thousand Twelve!