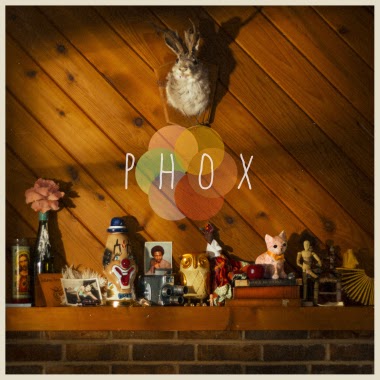 Baraboo, Wisconsinites  are known for… well, we’re not too sure what they’re known for. Cheese? Beer? Being close to Madison, we suppose. Though Madison is a nice Midwestern hub of the indie music world; and given that, here we have a nice indie band but a stone’s throw away from the capital. Who’d’ve thunk.

Phox, despite borrowing a sense of spelling from Phish et al, is their own unpretentious pop sextet: gentle, lofty female vocals cast about light, almost ethereal-feeling instrumentation. Instrumentation that knows that singer Monica Martin is their honey drizzled-down-the-throat, come-lie-by-the-river-and-watch siren. The group is light and fluffy. The group is playful. And, while the group has been getting a lot of attention, we think they can still do us a bit better on their next one.

But that’s getting ahead of ourselves: “Evil.” Catchy as a Magnum, P.I. – does that make sense? Yes, yes it certainly does; as much as a song about a destructive relationship can sound lovely and entrancing. “Kingfisher” floats on the surface much like the namesake bird: woodwinds and light strings, this is probably the best representation of Phox’s personality. Yet, despite our (and others’) accolades, we haven’t been spinning this album up as much as we’d expect. It’s good, well-constructed (and well-performed), but we think our preferences toward nihilism and annoyingly deep song subjects initially puts us off of such lovely music. Phox doesn’t quite pull us as far into the woods as it should. But they play about our mind, pleasurably, at that, just not quite to a 4/5.

Nonetheless, it is good music. We know there are those out there who are hungering for music that floats by like a cloud on a summer day, and if you’re that person, this is your album. Recommended.

Hunt the Phox on Soundcloud.