The Fate of Whitehorse Album Depends on Two Good Songs 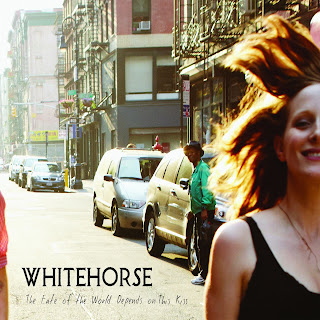 Whitehorse – “The Fate of the World Depends on This Kiss”
Six Shooter Records
-out now
2.5 / 5

Canadian folk band Whitehorse jumps right out of the gates. The husband-wife duo start right off with such a strong opening that we’re left wondering what’s to come. Unfortunately, not much is the answer. The quality of their writing is so uneven that it astounds us, and the vocals that drive these songs are similarly uneven.

“Achilles’ Desire” is one of those great openings, dark country, saloon gunfight kind of pace to it, that captures our heart. It’s strange and brilliant that it’s something of a love song, but in a sweaty, western kind of way. The chorus on the following track, “Devil’s Got a Gun,” is just well done. Congratulations. And the next track is also fairly good, but beyond those first three, the album falls entirely flat. We don’t know why that has to be. But we can tell it has something to do with overusing that low-end guitar as the opening hook; after “Devil,” it starts coming off cheap and unimaginative. It’s too foregrounded in “Jane,” which also suffers from lax vocals. And “Peterbuilt Coalmin” is probably the weakest of the songs here, which also uses that same kind of opening, and again tries to sell those bland vocals to us. Sorry, we’re not buying!

We suggest giving just the first few tracks a listen, but otherwise, you can take a pass on this one.

2013-06-03
Previous Post: Radiation City Rides in the Median too Long
Next Post: More Ravings for Ya – About the Blog