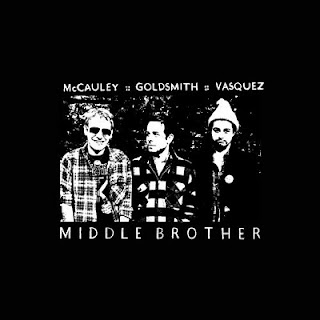 We make it little secret here that John Joseph McCauley III is, indeed, absolutely fawned upon. With Middle Brother, the Deer Tick frontman joins with Taylor Goldsmith of Dawes and Matt Vasquez of Delta Spirit to produce some inspired country (not “inspired” inspired, no). Starting with the takeout single, “Me Me Me,” which rockabillies all the way to Tennessee, you have to notice that there is some serious jam in these guys; so much so that one must wonder how McCauley can maintain so many projects over these past couple years. Nonetheless, “Middle Brother” isn’t a frazzled, frantic side project by some guys who just want another album (and definitely doesn’t fizzle like “Monsters of Folk”). Rather, this album is a cohesive unit, despite having three equal contributors. Check out “Blue Eyes” or the Beatles-ish “Someday” if any doubts linger about the sheer fun of good country. There’s nary a weak track here, and we highly recommend this one, even if you still think all country musicians are drunken hicks (McCauley doesn’t seem far off).