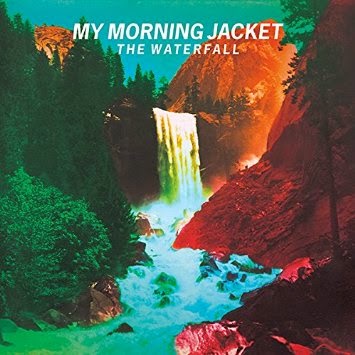 My Morning Jacket – The Waterfall
ATO Records
-out tomorrow
3.5 / 5

It’s an improvement, is what we’re going to say. Disappointed with 2011’s Circuital, which was an album-long slow build (into what?) The Waterfall feels something like a concept, using natural imagery (Spring, the tropics, …and of course a waterfall) that we can’t quite piece together. The title track immediately reminds us of CCR, and that band’s repeated use of rain: “Have You Ever Seen the Rain,” et al. But while Creedence very ably used (and re-used) water in terms of political change, “In Its Infancy (The Waterfall)” seems to be a strange conglomeration of some sort internal blockage, deadness, lack of movement, all of which a waterfall is of course well-known for. MMJ’s metaphor of the waterfall is clearly negative, and… well, we just don’t quite get it.

Sonically, The Waterfall is quality MMJ. Our favorite rocker out of this one is clearly “Big Decisions,” which is so polished and so kick-arse that we just have to love it. Again, lyrically, it’s not perfect: it starts talking about a lover who’s not ready to commit, apparently, and won’t make that “big decision.” The weak link comes in the lyrics when the narrator offers to make that decision “If you really mean it”… wha? Does it work like that? Other good-sounding songs, like “Thin Line,” make similar non-sense (“It’s a thin line between/ Loving and wasting my time”; is it really?), which is painful to say, but compared to 2008’s complex and brilliant Evil Urges, The Waterfall delivers half of what we were expecting here.

A great band with an above-par album. Recommended, yes, but needs a bit more polish in those blasted lyrics!

Stream them on Soundcloud.