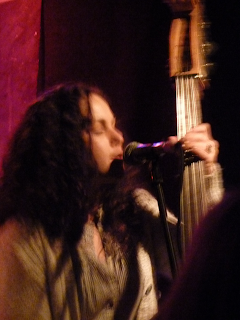 Well. We’re not going to lie and say that Amy had a bigger crowd than Rich Robinson, the main act last Thursday. But we are going to say that her trio (Shawn Zorn d., David Cousar g.) certainly deserved one. Our gal in Memphis felt the love in the dingy TT The Bear’s, and armed with her repaired acoustic bass (plus stickers of Johnny Cash, a cartoon), the diminutive bassist + two conjured a mood perhaps more fitting for a slightly cleaner basement bar; judging on the dark color of their songs, plus the knit, almost jazzy vibe between the three, we’re going to presume they’d fit in a seedy venue in gay Paris. Unlike Robinson’s ‘blast the mid-range through and pretend they hear the vocals’ approach, LaVere and her crew showed far more restraint and balance through tunes ranging from Bowie to Waites, and of course, her own ‘knuckle-draggers’ on her latest full-length. We’re going to complain that they only got just under an hour for their set before the Black Crowes-man got to his sound and fury (signifying… well, the release of his album we suppose), but in that brief moment we were surprised by the depth of moods conjured by the light setup. LaVere’s three reminded us much of another trio, the short-lived Morphine, both in darkness and – damn! – range of color. From heavy, low-ended, sultry seduction, all the way to bright, ‘open up the shades already’ sway (“Stranger Me,” no less), we’re going to affirm that their live act is no one-note band. In short, live: impressive. And she’s really sweet in person, too. Check out her further dates on her site, and her upcoming gig in The Wandering. Yo.