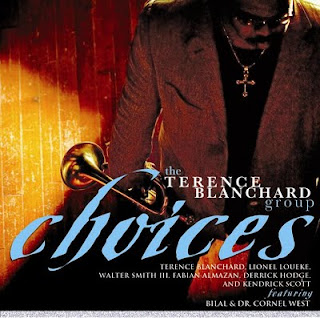 If you’re unfamiliar with Blanchard’s work, simply sit back and enjoy the unexpected twists and snakes of “Byus,” the first track to his latest album. “Choices” is interspersed with spoken vocals by Dr. Cornel West about the choices people make in life: whether to go to school, whether to be a musician, whether to be good or not. This conversational tone to the album spices it up a bit and gives it a second voice; one that it can use, because it doesn’t quite have the sweetness and light of his 2003 “Bounce,” or the thunder of 2007 “A Tale of God’s Will.” But here are still excellent performances, especially in the extended acoustic set “Winding Roads,” and the more fusion-funk of “A New World (Created Inside the Walls of Imagination).” These tracks showcase the depth of Blanchard’s talents as a composer, and where he’s lacking is in the general focus of this record; also, don’t take this to mean his performances throughout aren’t up to par. Not quite his greatest, but still an achievement. Recommended.